Today I received this photo of Martin Scott's Mistral Evolution.  It's nice to see one of the two Mistrals which I've been posting about actually make it to the water!  John Z: are you listening?!

Back in the fall Bill Walton flew up from Texas, rented a U-Haul van and picked up a Penguin class dinghy which I'd owned for the better part of forty years.  This wasn't just any Penguin dinghy but one of six which his father build in 1963 and the only known survivor of that cluster of boats.

Actually, my involvement with this boat began during the winter of 1963 when I helped Bill's father John while he built these boats.  During the winter of 1962/63 a bunch of island kids, including your diarist, would hang out in John's shop.  He'd put us to work doing small tasks while the boats were under construction.  One of my jobs was to take a stick of wood with sandpaper glued on and ream the squeezed out glue slag from the interior of the centerboard trunks until the pivoting centerboard worked smoothly.  I got five out of the six trunks satisfactorily sanded but try as I might, I just couldn't quite get the trunk of the orange boat to work properly.  School and other activities interrupted my time at the boathouse and somehow communicating the status of the orange boat's trunk slipped through the cracks.  In spring, the boats were picked up by their respective buyers.  I think only one or two found owners at Brigantine YC.

Later that summer I attended a multi-class regatta in my Moth down at Corinthian YC in Cape May.  The club, as was normal practice in those days, used a rolling start which initially separated the various classes by five minutes; i.e. the first class's starting signal was the 5 minute warning for the second class and that in turn was the 10 minute warning for the third class and so on.  Moths and Penguins were at the tail end of the start sequence pecking order and so I had a bit of time on my hands.  I noticed an orange Penguin not far away and I sailed over, hailed them and said "That's a Walton Penguin!"  The boat's crew, her husband and wife owners, confirmed that indeed it was and asked how I knew.  I said "I worked on those boats while they were being built."  They asked what part of the boat I'd worked on and I replied "The centerboard trunk."  The wife looked at me stonily across the intervening water and said "That's the part that doesn't work!"  I quickly sailed away...

Twelve years later, being both boat-less and recently discharged from the Coast Guard (oh, and without much money) I decided to drive down the  coast from Brigantine, revisiting the various clubs where I used to race to see if there were any boats for sale within my slim price range.  After stopping at various clubs without success, I found myself at Corinthian YC.  At the very end of the boat storage yard, right at the edge of the water was an Orange Penguin with a white bottom.  She was resting upside down but I knew at once that this was that boat.  Sure enough, after flipping her over I saw John Walton's builder's tag.

I happened to know the girl working the club bar (we both were students at the University of Delaware) and so I asked her to see if she could learn which club member owned that boat.  The owner turned out to be a lawyer from Philadelphia who proved only too pleased to untangle himself from the seldom used Penguin.  The boom had been trapped under the hull but the wooden mast had floated off, probably with the first high tide.  Luckily, he had the rudder, sail and other small gear for the boat in a storage locker.  The hull was sound except for the rub rails which had been in direct contact with the damp sand.  I offered him a hundred dollars and he quickly accepted.  I borrowed a trailer and brought the boat back to her birthplace.  I had a local boatyard replace the rotted rub rails but I reserved the task of sorting out the centerboard trunk to myself.  Providence had given me a second chance to  right this wrong and I did.  When finished, the blade pivoted effortlessly.  I repainted the little boat white and sanded and revarnished her interior.  Jack Wright, a well known Penguin builder in Germantown, PA supplied a used mast for $25 dollars.  After putting the hardware back on, I sailed the Penguin for several years before getting hip deep with Moth Boats again.  Once I started racing Moths, the Penguin sat in the garage.  From time to time I'd look at the boat and tell myself I should pull her out and sail her again, but I never got around to doing that.

I needed to clear out my garage and decided that I didn't want this bit of Brigantine history to just disappear so I spoke with other long standing members of the BYC until I learned Bill's contact information.  I emailed Bill and offered him the boat for a very small price.  He immediately emailed back saying that he wanted the boat as a tangible connection for his son to his paternal grandfather and to the island.

Over the years I've bought and sold many boats.  I've yet to regret the selling of a plastic boat.  The boats I do miss have all been wood.  Why is there a slob sentimentality connection between me and wood boats?  Why can I sell off a glass boat with flinty-eyed resolve?  Perhaps it's due to woodies being constructed from once living things. Or perhaps the act of selling a particular bit of wood marks the severance from people and places that where once a large part of an early and formative era of my existence.  I don't know, but the tug is genuine.

A while ago, Roland Hunn sent me the photo below of his parents, Ethel (Toby) Hunn and Knute Hunn standing next to Toby's Moth, Miss Fortune, Nr 500.  The venue is the Riverton Yacht Club which is located on the New Jersey side of the Delaware River, across from Philadelphia.  The date is some time in the immediate post WW II era.  Although the specific design and builder of the Moth are unknown, the sail number suggests that Miss Fortune was most likely built in 1938 or 1939.  Mrs. Hunn enthusiastically raced the boat with perhaps her best result being the third place she achieved in the women's division at the 1946 Nationals down at Elizabeth City, NC behind Peggy Kammerman (Evening Star YC) and Ruth Nickerson (Pasquotank River YC).

Riverton is interesting in as much as it was a hot bed of dinghy racing activity, spurred by the presence of the Lippincott Boat Works. During the forty years spanning 1946 to 1986, Robert and Howard Lippincott built a number of class boats including Lightnings, Comets, Stars, and Dusters.   Howard's obituary, which briefly details the family business and involvement in one-design racing can be read here.

I attended just one regatta for Moths and Comets in the early 1960s at RYC and in the end didn't race.  Here's why:  My father and I arrived early on the Saturday morning, for Riverton YC's annual two day invitational regatta, in order to register and put my boat together.  As it turned out registration had not yet opened so I wandered down to the docks in order to scope out the intended race area.  When I got to the pier I noticed that the water was fouled with heavy "Bunker C" fuel oil from one side of the river to the other.  I asked an elderly man what was up with that and he said "Boy, look across the river. Do you see the shipyard over on the Philly side?"  I nodded that I did.  He continued, "They salvage old Liberty ships for scrap over there and yesterday they cut one below the waterline."  I looked again at the river and said "I'm not going to put my boat into that mess."  A man using the chain hoist to launch his brand new fiberglass Comet overheard me and said "I need a crew.  Since you're not racing your Moth how about crewing for me?"  He then launched the Comet, and since it was light air, pushed off for a solo sail.  When he was several hundred feet away from the pier I heard him exclaim "I think my boat is dissolving!"   I looked at my Dad and said "Let's get out of here."  In all my years of racing small boats I've never been back to Riverton.

Now this was years before environmental concerns where large in the public's mind and I'm sure the river is much cleaner now than then, but thinking back to that day I now appreciate why my father was fond of declaring that politicians should be tied up in bunches of three and thrown into the Delaware!

Although the CMBA Nats were held way back in mid September, I'm just now getting the gumption to post a few of the better ones.  Due to my head injury I was a spectator this year. 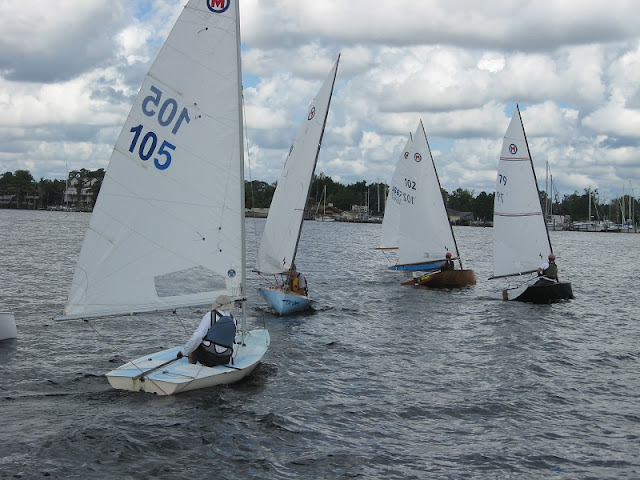 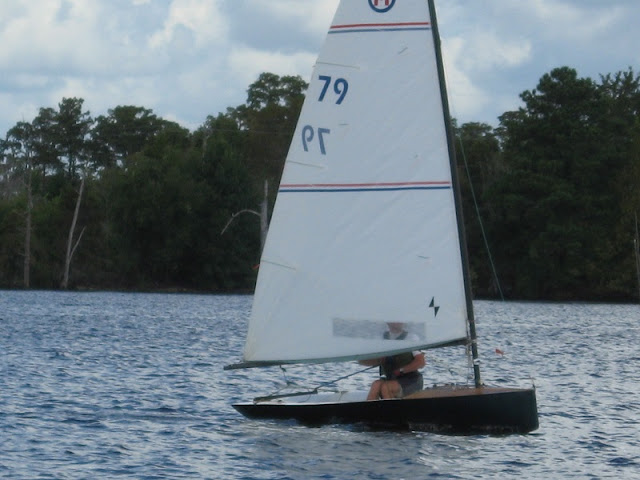 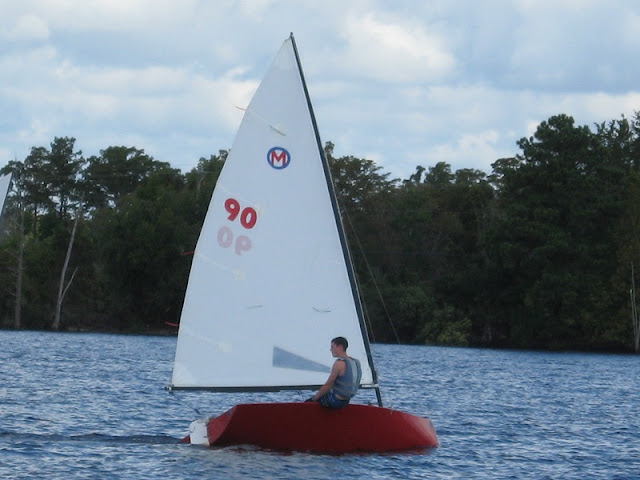 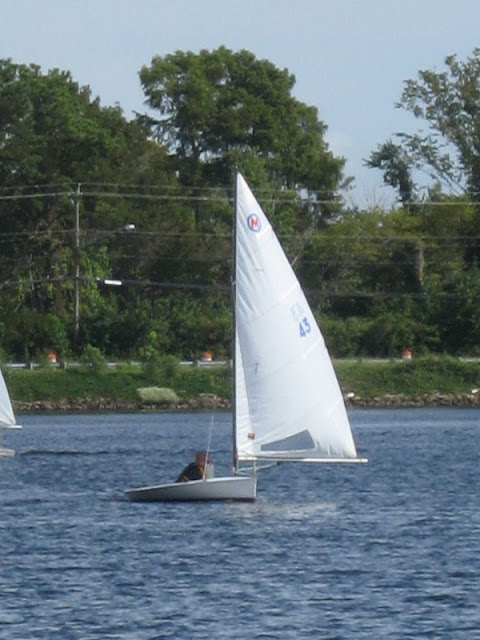 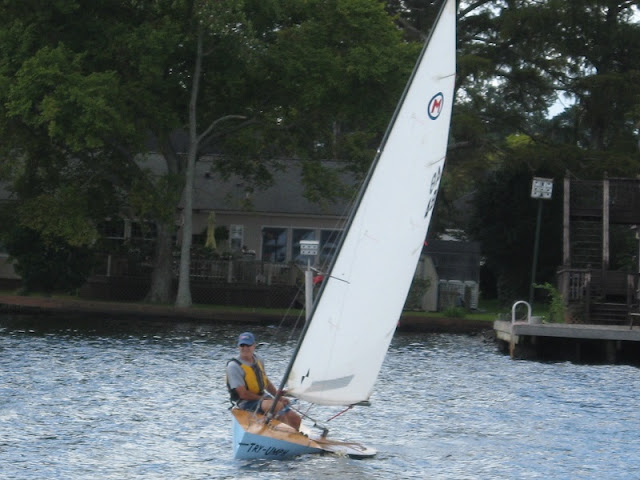 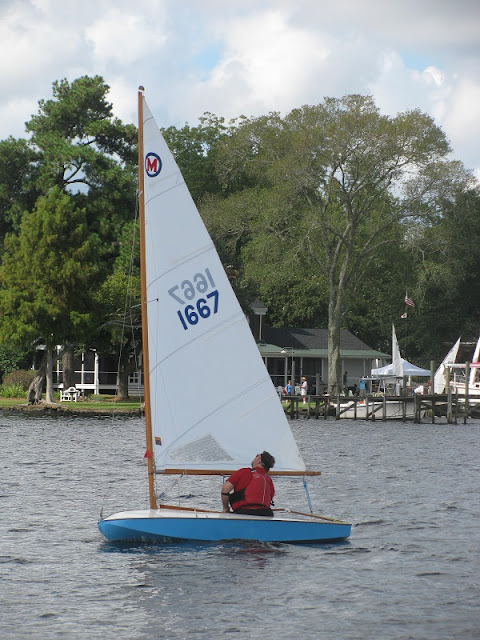 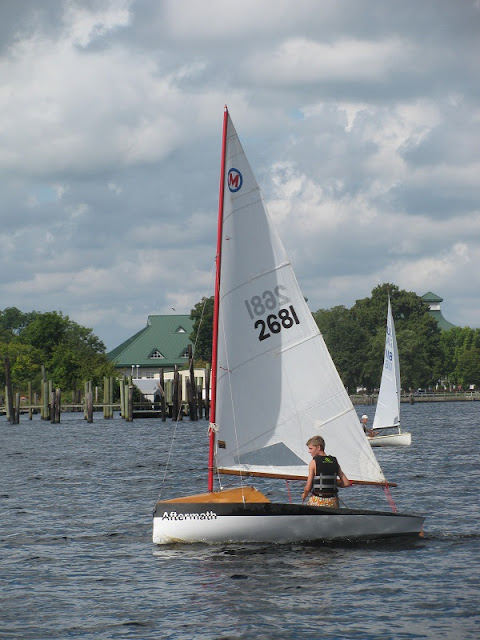 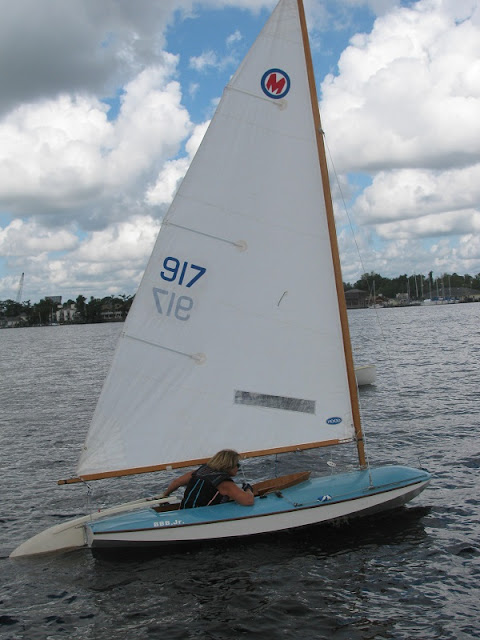 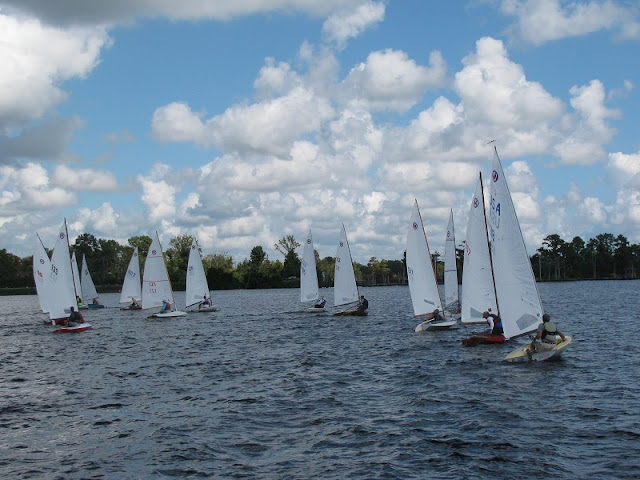 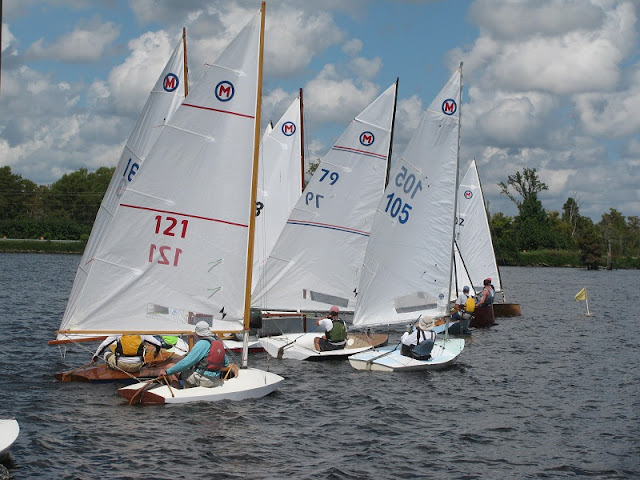 Those who follow my figure skating blog no doubt know that I took a spill awhile back.  Now that my head no longer aches and my vision isn't blurry I suppose I'd best get some pix posted from this year's regatta.  Many Thanks to diaristdaughter for being the designated photographer and diaristwoman for helping not only with lunches but many other behind the scene tasks as well.  The Courters are also to be thanked for hosting their always well enjoyed pre-regatta party.  This event wouldn't take place without lots of help.   Next year this regatta turns 25! 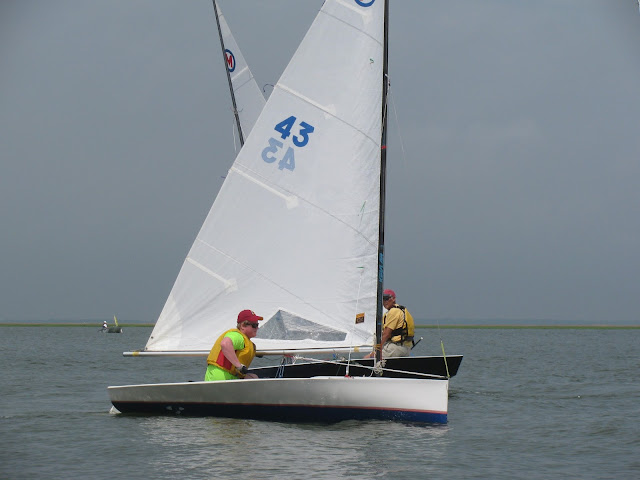 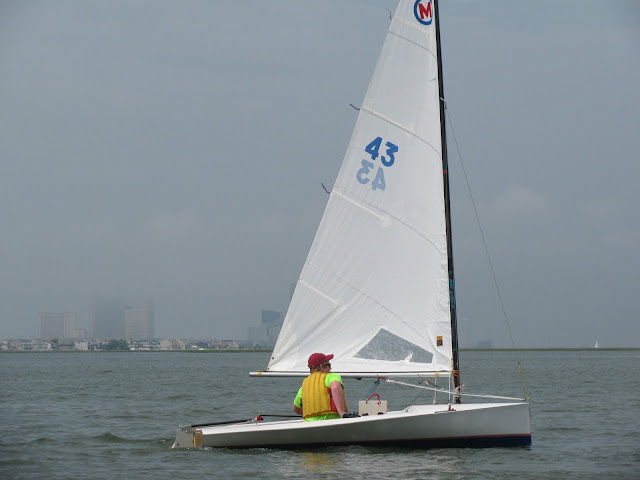 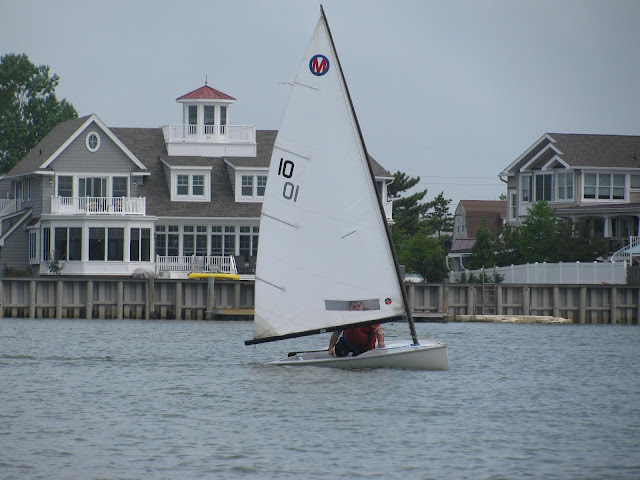 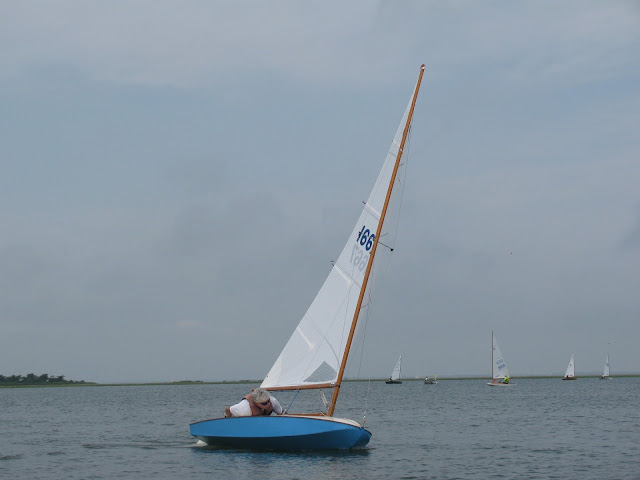 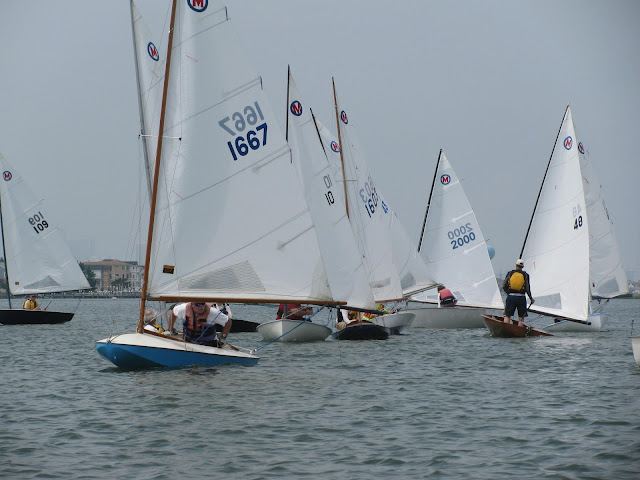 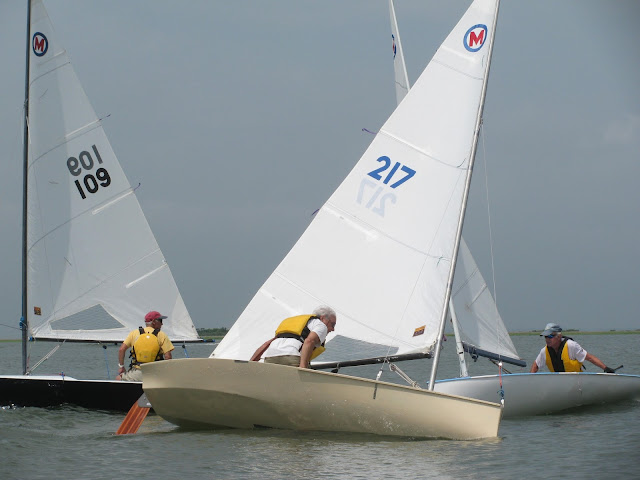 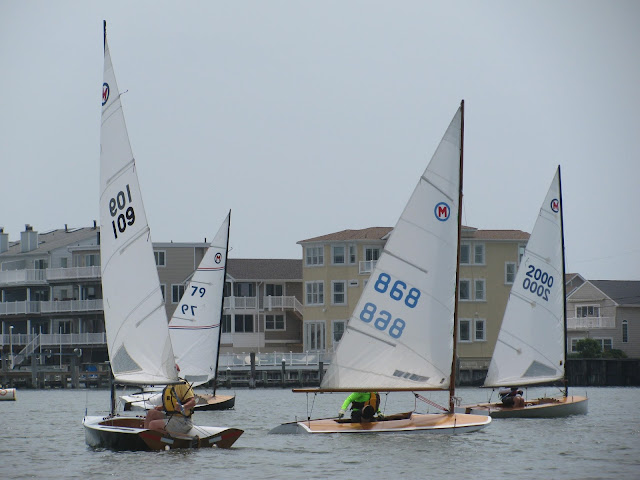 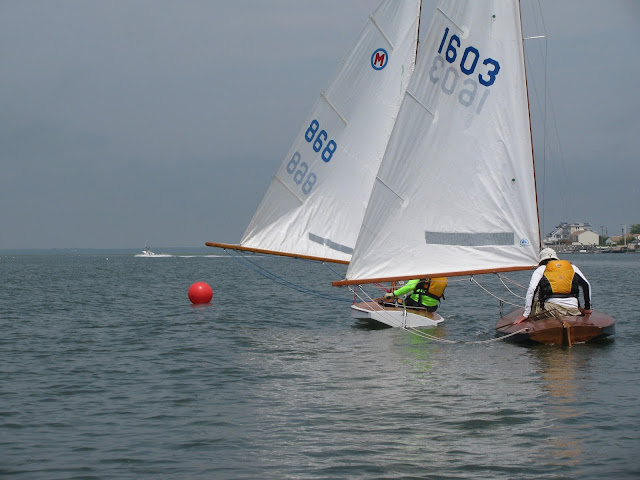 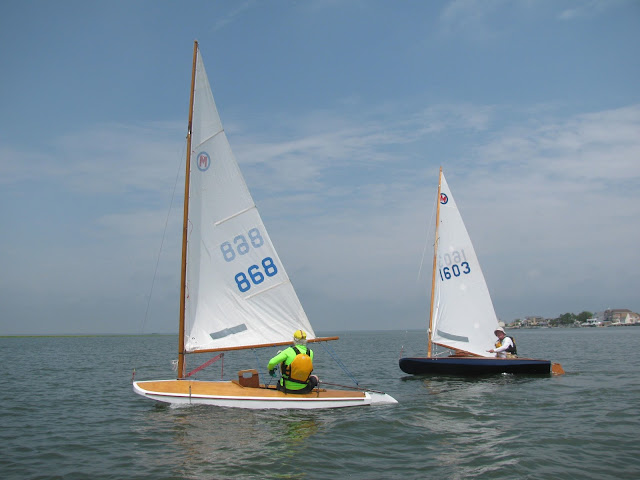 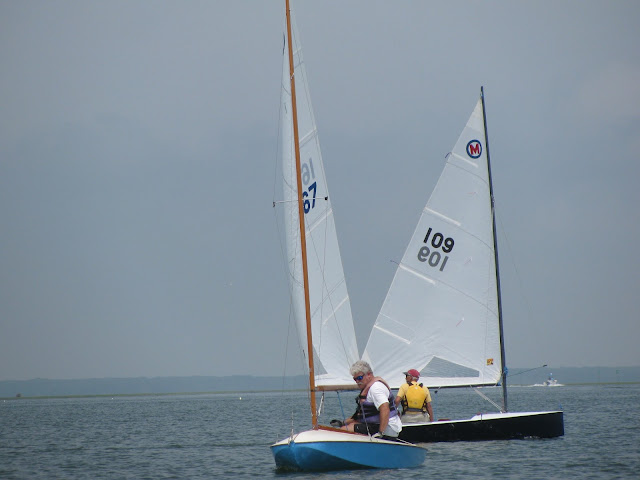 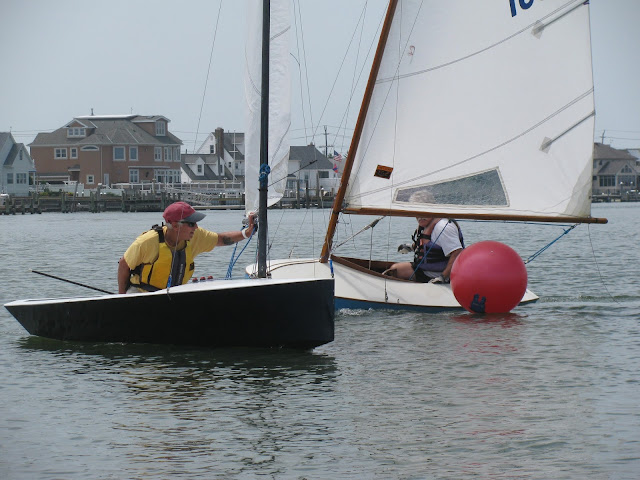 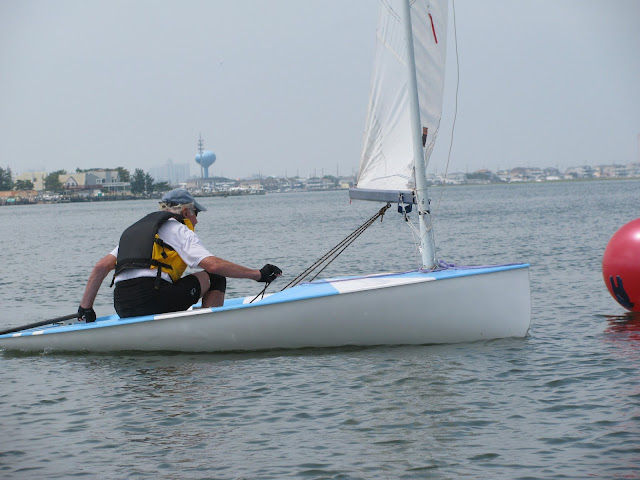 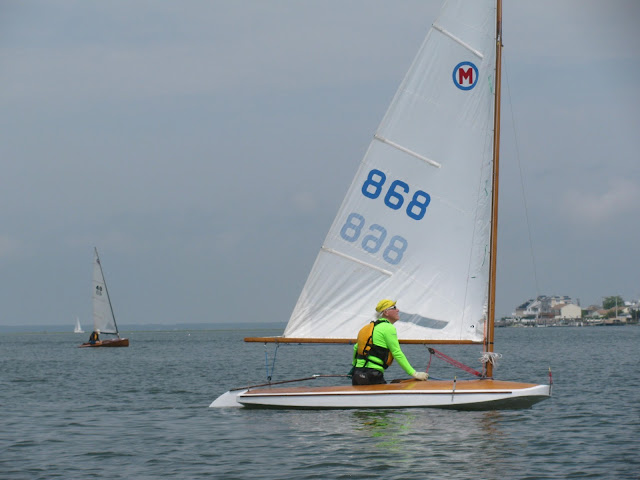 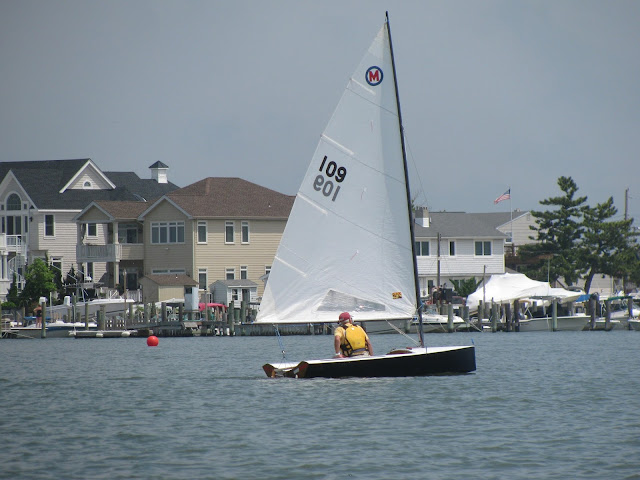