Longwood Gardens is a locally well known botanical garden located between Chadd's Ford and Kennett Square, Pennsylvania. As a boy I grew up on a farm in nearby New London, PA and so visited the gardens several times each year with my parents.

Longwood was purchased from Pennsylvania's Quaker Proprietor, William Penn, by the Peirce family in 1700.  The farm was in turn purchased by Pierre S. DuPont (one of the "chemical" DuPonts) in 1906.  DuPont continued the development of the Peirce family's earlier arboretum and during the 1930s created much of the gardens which are preserved today.  Longwood was transferred to a foundation in 1946 and opened to the public.  Both of my readers can learn more about Longwood Gardens by visiting their web site: http://wwwlongwoodgardens.org/  Yesterday was a rare late December day with temperatures flirting near the upper forty degree mark.  My wife, her parents and our daughter decided to make the two hour trip north.  I decided to stay home and work on one of my boats since the air temps were just high enough for epoxy resin to cure before it freezes.  But no matter; my wife, the goodly Elisabeth, took the family digital along and captured a few exposures for your enjoyment. 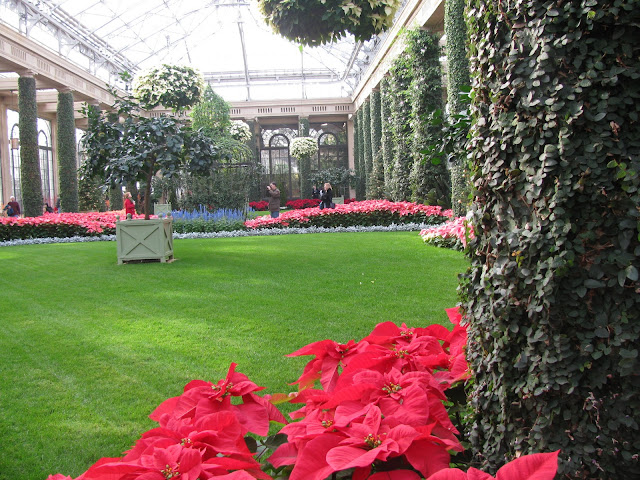 Longwood has extensive outdoor fountains (not active in winter) but for the Christmas season the outdoor light display is well worth a visit.  Sadly, no outdoor pix this time.  The photo above shows part of the interior of the main conservatory. 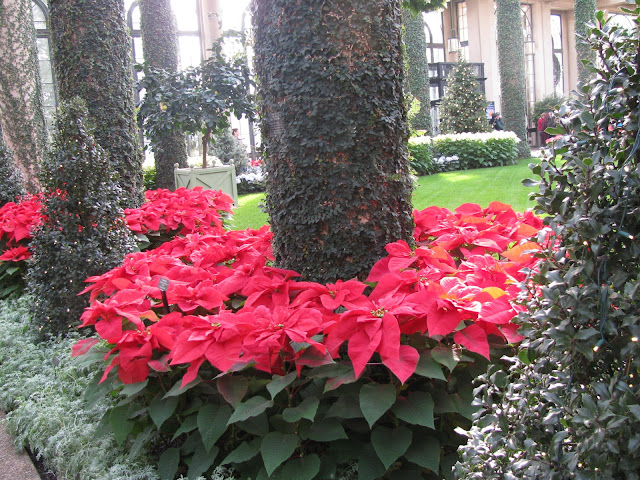 A closer view of the poinsettia-ringed column seen above. 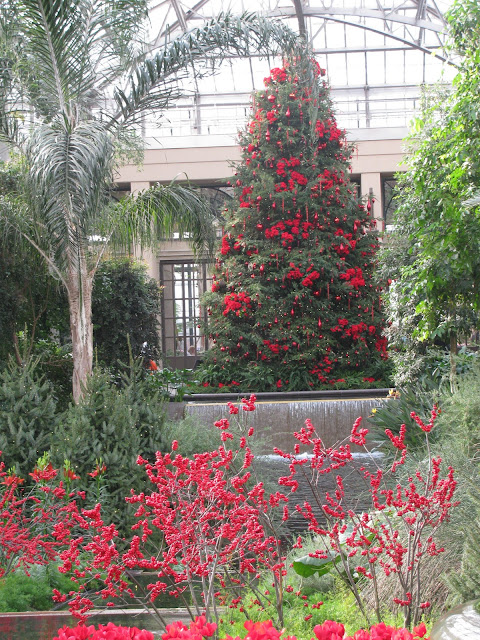 One of several Christmas trees in the Orangery.   Note the waterfall; a nice indoor touch don't you think?  The rich really are different from you and me. 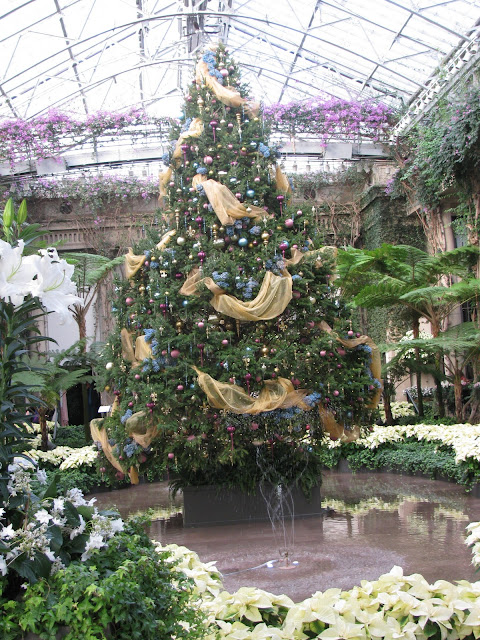 The tree at the opposite end of the Orangery 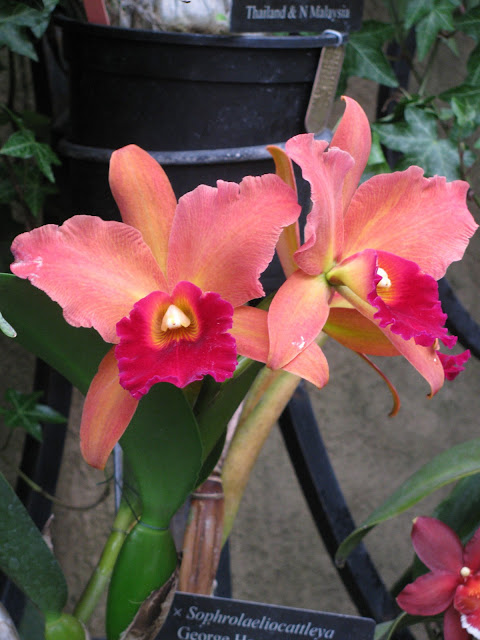 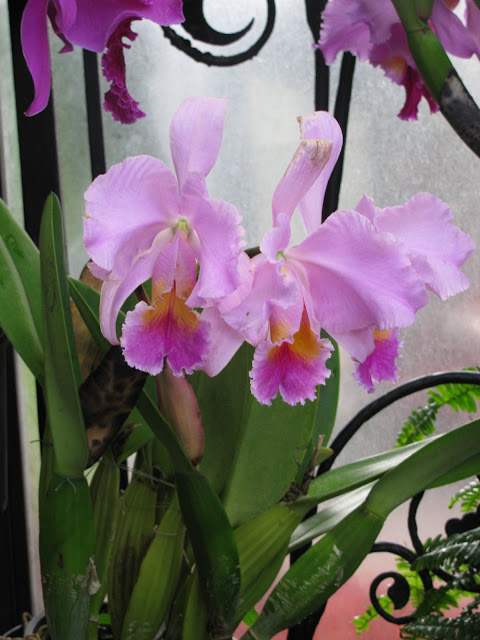 l
Longwood has an extensive collection of orchids.  The Cattleyas were putting forth an elegant display. 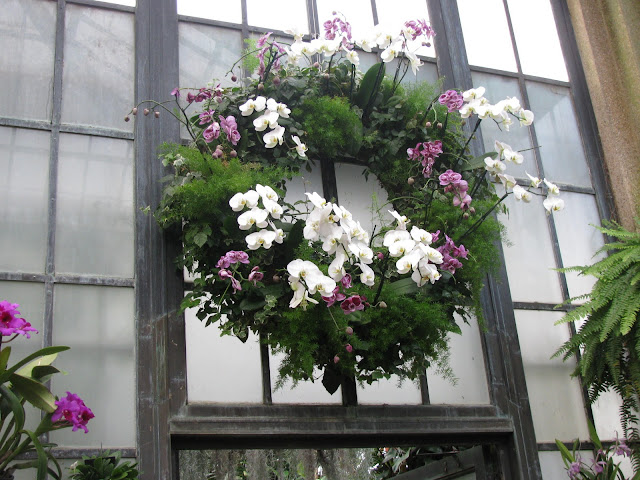 An unusual holiday wreath made of orchids and fern. Paper whites and Poinsettias; a touch of winter with the promise of spring.
Posted by George A at 7:21 AM No comments:

This is the first post for random wanderings up and down the eastern seaboard of the U.S. My inspiration is Charles Winpenny's excellent "Cornwall Cam" which, as its title suggests is a photo documentary of Charles' walks around Cornish in the UK.  If you don't know about Charles' site, I highly recommend a visit: http://www.cornwallcam.co.uk/  Charles posts new photos on an almost daily basis.  I will not be quite so prolific but hope to have something of interest at least weekly.  I live near Annapolis, Maryland and travel up and down the east coast to race Classic Moth Boats.  Today's pix are from yesterday's visit to check our summer house on the island of Brigantine in the state of New Jersey.  An unusually strong winter storm had dumped snow on the island the previous Sunday and Wednesday when I checked the house, the ploughs were still very busy. 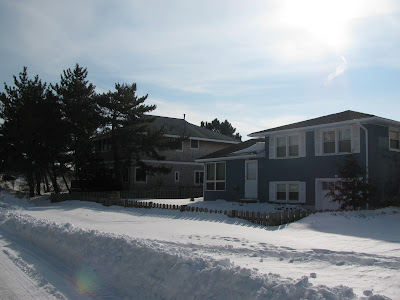 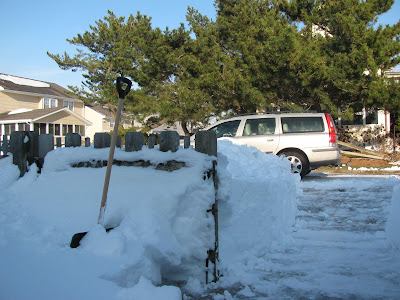 The city had managed to plough a single file track down our street.  The fence in the foreground is 4 feet high.  A bit of shoveling allowed me to move a load of tools that I'd brought along from Maryland into the garage for storage. 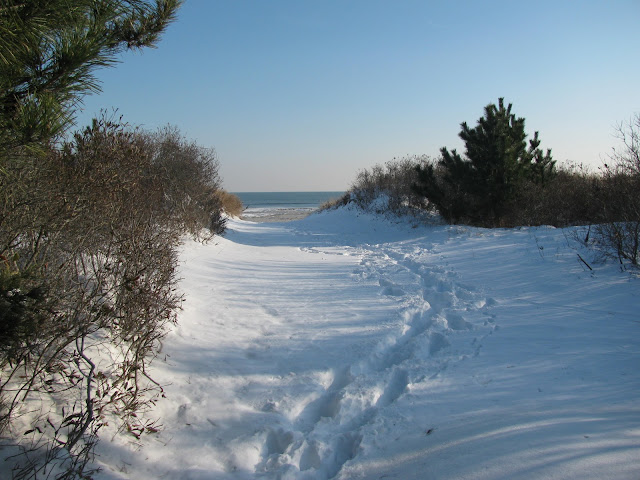 The drifts lay deep upon the dune.  Yesterday was sunny and relatively mild with winds in the sub 10 knot range and afternoon high temps around mid-30 degrees F. 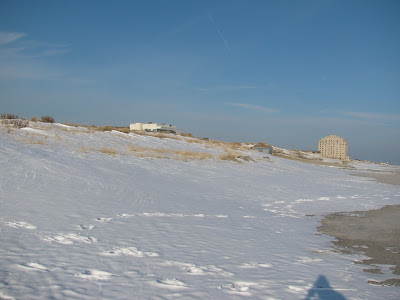 At one point the snow had covered the beach but the subsequent high tides had eroded much of it away to the dune line.  The large building in the distance is the old Brigantine Hotel.  This is one of the few buildings remaining from the land development boom of 1927. 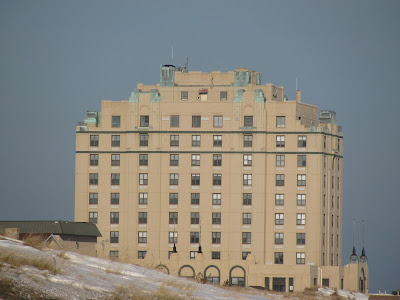 Zooming in closer on the Hotel. 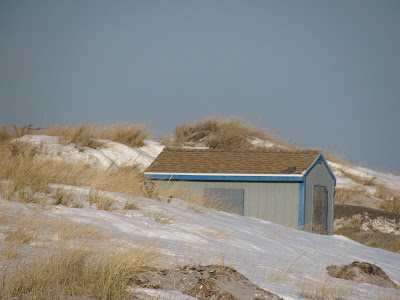 A life guard shack, nestled in the dunes, takes it's winters nap.


Atlantic City is on the next barrier island just south of Brigantine.  The city's infamous Casinos loom in the near distance. 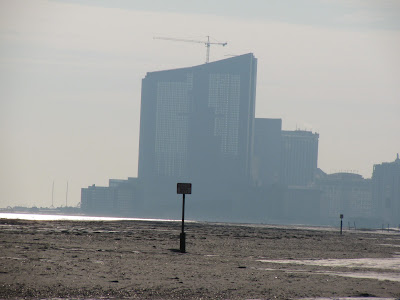 Fortunately Absecon inlet separates "us" from "them"!  But sadly, Brigantine is not as quiet an island (at least during summer) as it was when I was growing up back in the 1950s. 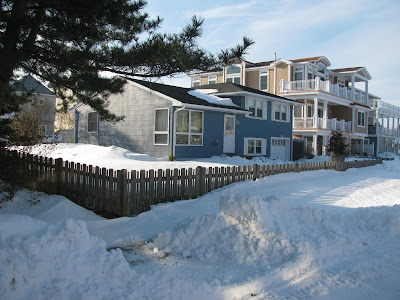 Many of the smaller houses on Brigantine, like mine, are being bought as "tear downs".  Large "MacMansions" are replacing these modest homes.  This is a pity in my opinion, but at least until the next hurricane comes along we're stuck with the new high buildings which block the summer's breeze.  I've resisted installing air conditioning in our house but this spring will finally yield to the reality that our house does get uncomfortably hot during the hottest months of summer. 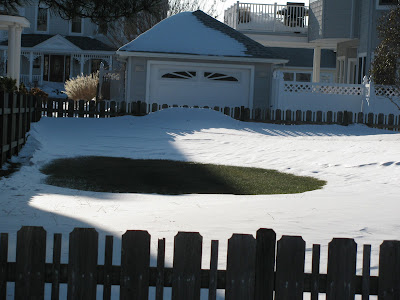 A curious bare patch of grass courtesy of the 50 knot winds that blew during Sunday's storm. 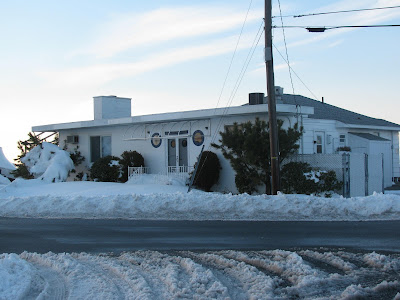 On the bay side of the island, the Brigantine Yacht Club looked very forlorn.  Our family joined this small dinghy sailing club in 1951.  I've been a member ever since. 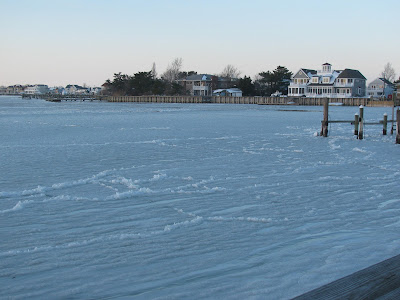 Ice almost completely covered the bay.  Bay ice is rarely trustworthy enough for ice boating and largely is a nuisance since it forms large blocks around the pilings of piers.  These blocks of ice are buoyant enough to lift pilings out of the mud on subsequent high tides which leads to lots of spring time work for dock builders and pile drivers. 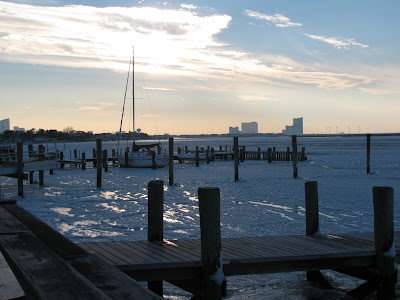 This small sloop won't be moving any time soon. 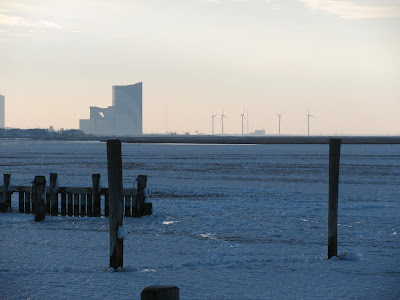 Looking towards the southwest.  Another casino, this one the Borgata, seen across the bay ice.  Atlantic City's small wind farm is also visible. 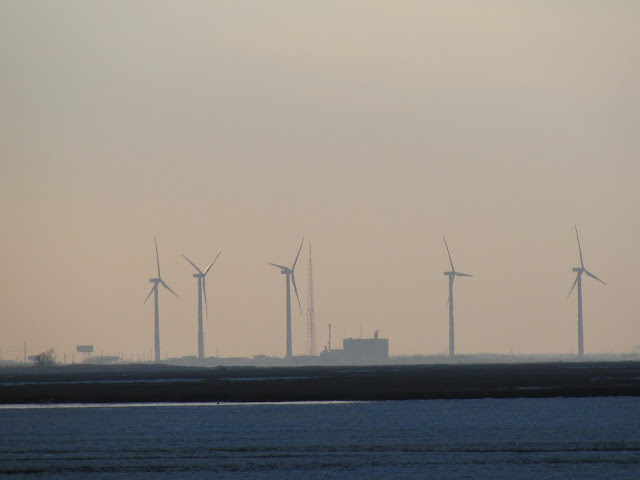 =
Zooming in on the wind farm.  Have you every wondered were the electricity generated by wind energy goes?  These mills provide enough power to running AC's sewage treatment plant. 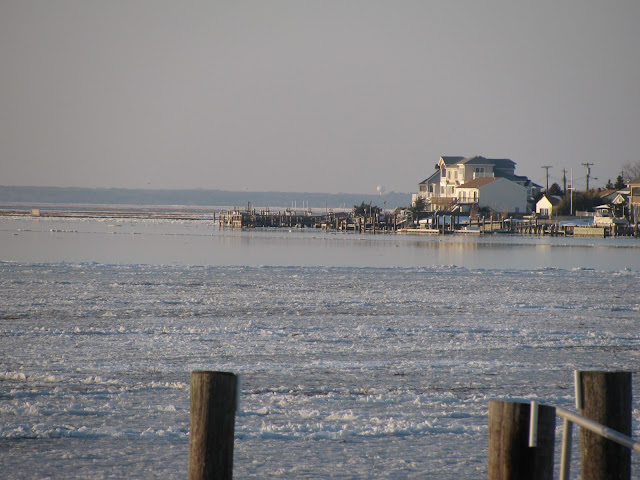 One final look at the bay.  Zooming towards the north, one can see open water about a mile away from where I'm standing at the yacht club.
Posted by George A at 7:48 AM 1 comment: