Both of my long time readers  will recall that towards the end of last summer I attempted to see a Moth Boat which was supposedly on display at the Stone Harbor Museum.  Diarist family was down on the Jersey shore last week and so a second attempt to see the Moth was made.

We had 16 boats (two Generation II, twelve Generation I and two in the vintage division) show up for this year's BYC Moth Regatta. We also had a very strong NE wind show up as well.  The fifteen knots steady part was OK, but the fluky and harsh gusts (in the mid-twenties) caught out several skippers and kept the crash boat crew busy.  Roughly half the fleet went for a swim before the day's six races were in the books. On the plus side, the strong wind was a great equalizer between boat designs and skipper weights which lead to closely grouped clusters of boats at the marks and finish line. Walt Collins in particular was very competitive in his Europe giving the two Mistrals plenty to think about. At the end, Joe Bousquet was first in Gen II, Walt crushed the rest of us in Gen I and Bill Boyle took his newly restored Abbott to the winner's circle in the Vintage category. All in all a very enjoyable event. My right wrist is still swollen but it was so worth it even if I couldn't sheet in very effectively! 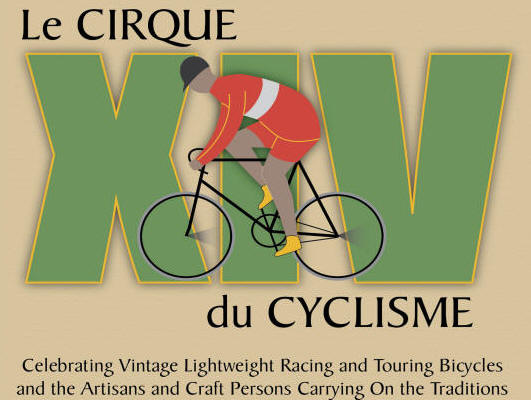 Le Cirque du Cyclisime is an annual multi-day event devoted to steel framed racing and touring bikes from the late 1930s to the mid-1980s.  The 1930s are looked upon as the start of the classic bike period in as much as this time point saw the beginnings of the production of high quality bikes built from lightweight tubing such as the well known Schwinn Paramount.  But one might ask what's so magic about the mid-1980s as a cut off date?  Good question.  One answer is that Tullio Campagnolo, the inventor of many of the components we now take for granted such as the quick release skewer for wheel hubs, died in 1983 and that his passing is a good defining point as the end of the classical period for  hand-built bicycle construction.  After the mid-1980s bicycles moved away from hand-built lugged steel frames and increasing used aluminum, titanium and most recently carbon fiber in a more productionized environment that stresses output rather than craftsmanship.  Of course opinions are divided on this subject but, never the less, there is a large following of enthusiasts who collect and ride the high quality bikes from this era.  They meet annually for this combination bike show/swap meet and to exchange knowledge via seminars devoted to topics such as wheel building, the history of different brands of racing bicycles etc.  There are also group rides through the surrounding countryside for owners who have brought their bikes for display.  Your diarist still didn't have enough grip strength in his right hand to safely ride a bike,and so was content to go on the final day of this year's meet for the Sunday bike show and swap meet.  Let's breathe in Le Cirque's atmosphere.


There were many other things to drool over in the vendors area but I took several deep breaths and moved on to the display tent.  Unfortunately my camera was misbehaving in macro mode and so my detail photos of the many fine bikes on display are not all that good, but luckily for you many detail pix can be seen here and here.  What follows are a few of my pix that are worth a look.