The 2020 Nationals--The Regatta that almost wasn't

The Classic Moth Boat Nationals, by tradition, follows on the 3rd weekend in September.  The combination of Covid-19 restrictions and hurricane remnants almost derailed this year's regatta. Even delaying the regatta from the traditional date to the Columbus weekend in October didn't get us completely out of the cross hairs of this year's hurricane season. Winds were predicted to be on the light side of the spectrum for Friday and Saturday. Sunday was billed as a probable day of steady rain. Whenever one changes the date of an event, there are winners and losers due to unmoveable obligations and other commitments. We were happy to have sixteen boats assemble for the regatta. What follows is a collection of photos taken by Greg Duncan and/or Lloyd Griffin during Saturday, the single day which we sailed. Racing was abandoned on Sunday. 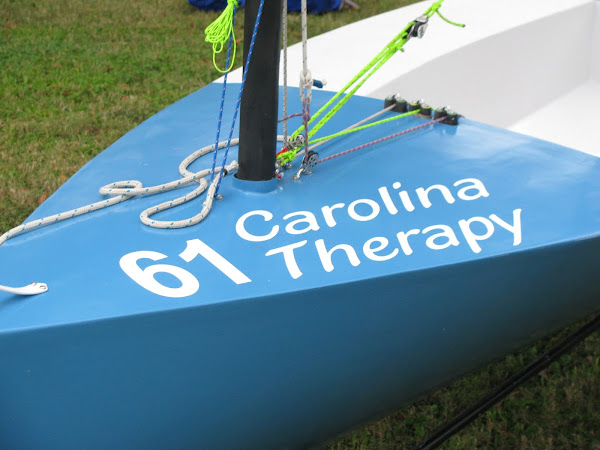 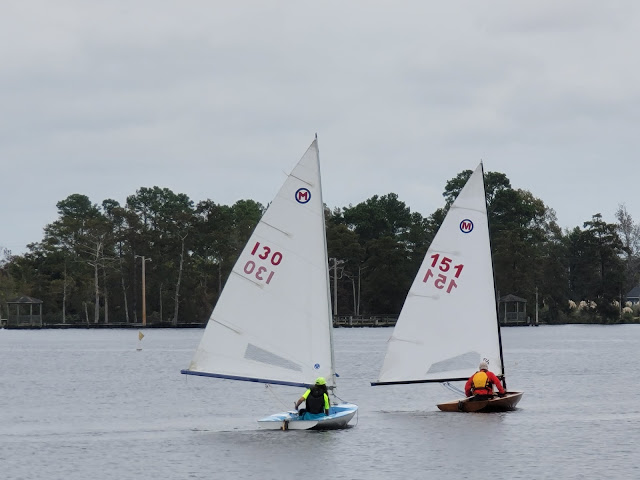 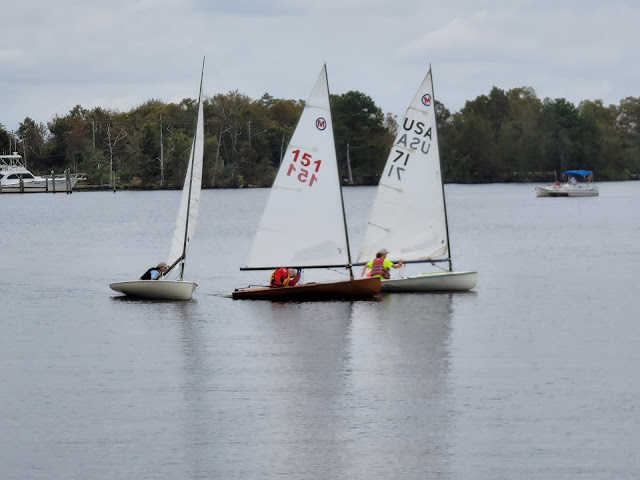 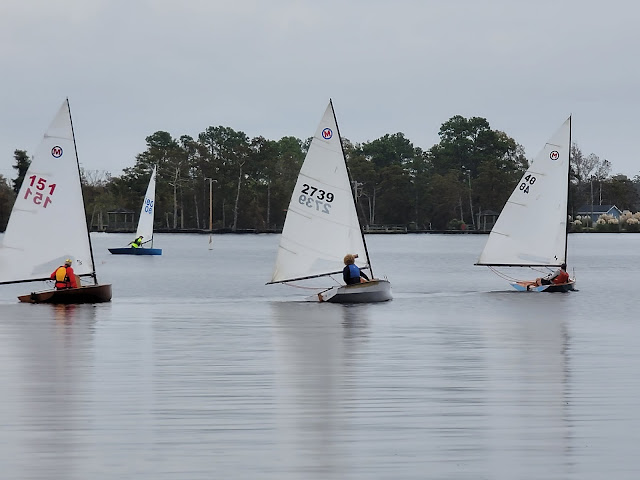 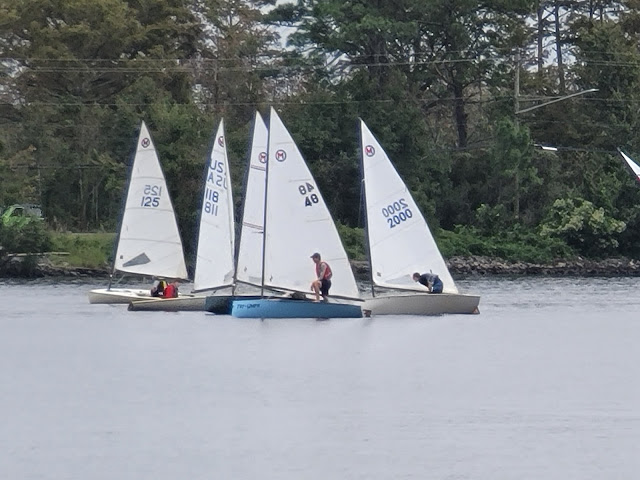 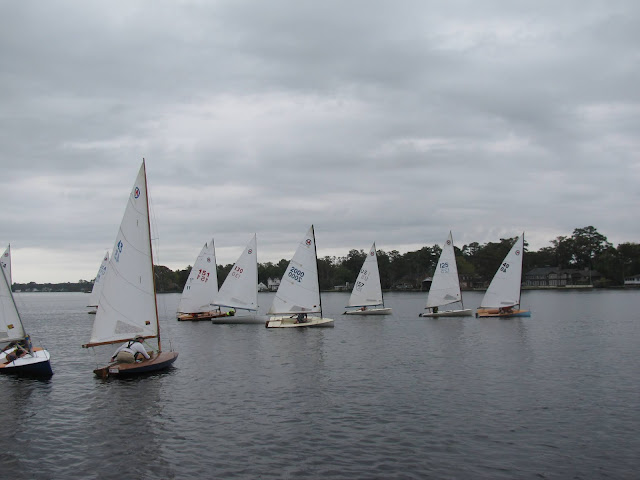 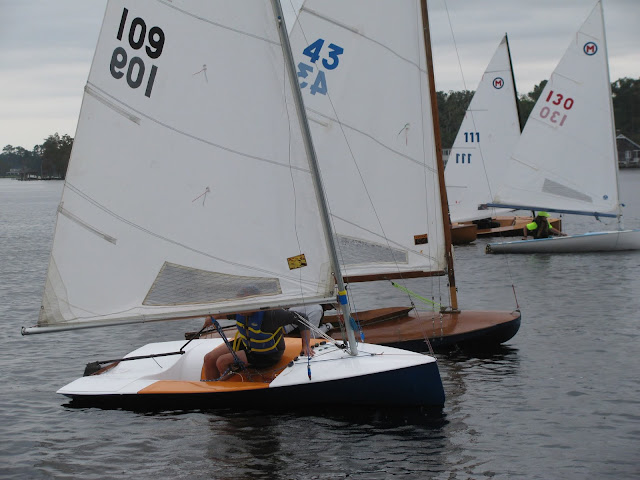 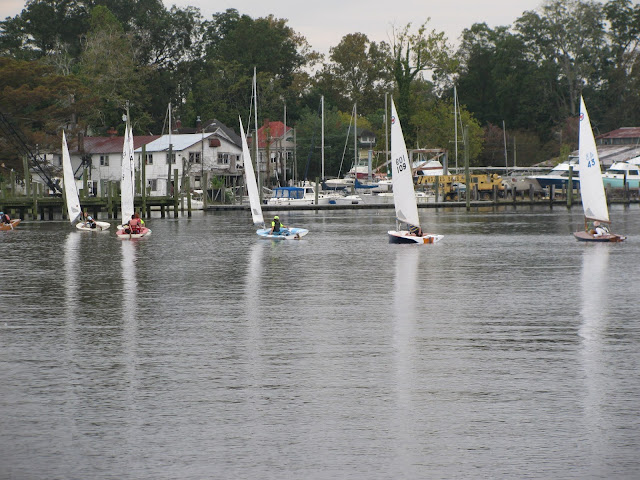 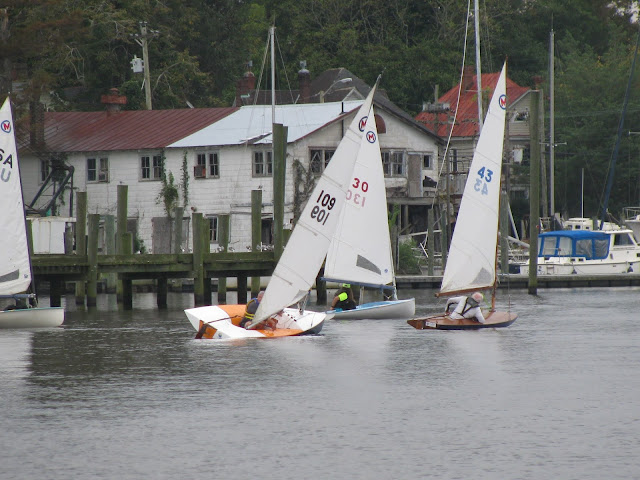 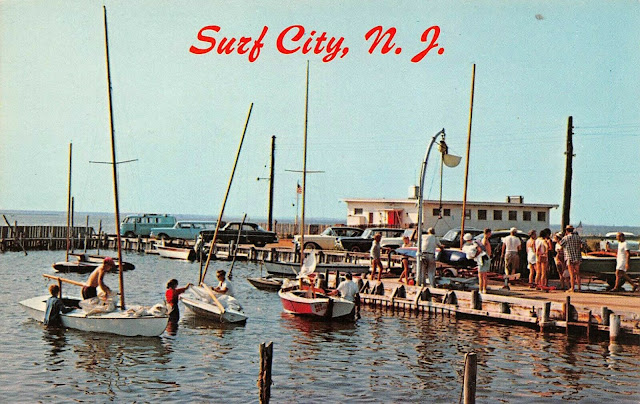 Email ThisBlogThis!Share to TwitterShare to FacebookShare to Pinterest
Labels: Postcards

Bill Spencer, the US Moth National Champion in 1959 recently contacted me.  We emailed back and forth reminiscing about the time Bill brought his Bill Lee designed moth Cobia up to Brigantine for our annual summer regatta which was prior to the 1963 Nationals at Ocean City YC (New Jersey) and the International Regatta which that year was held at Larchmont YC  (New York).  Bill reminded me that he had won the Nationals in 1959 when they were hosted by the Corinthian YC of Cape May (New Jersey).  That jogged my memory and led me to the pages of an old scrapbook which another Moth Boater, George Spiecker, had given me about a year earlier.  Indeed, inside the pages of George Spiecker's book were news clips detailing the 1959 event.  Bill won, sailing Cobia.  The regatta, initially slated for three days was shortened to just the completed races from Friday and Saturday.  High winds with gusts measured at 50 mph cancelled Sunday's activities for the remaining 83 boat fleet.  What follows is a distillation from George Spiecker's scrap book plus the official results, kindly supplied by Bill Spencer from his Moth archives.  Thanks to both, there will be more Moth history from the the late 1950s period coming to light in the following posts.  Stay tuned. 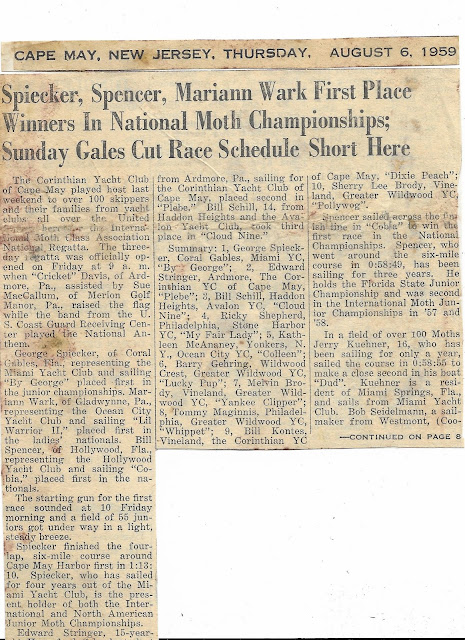 Bill's surviving copy of the registration list is quite informative.  It lists several Brigantine sailors as well as Tom and Bob Patterson, plus their dad Carl.  Bob and his dad shared a boat since general participants sailed at different times than  the juniors and ladies.  The Pattersons sailed Connecticut design Moths. Tom came in 50th and Bob was 57th out of 60 juniors.  Bill Schill also sailing a Connecticut, raced at this event, coming in 5th in the junior division.  Overall there were 124 skippers and109 boats at this event.  Many of the juniors sailing  this event, such as Frank Adshead, would go on to become major players in the next few years.

The ladies division was 28 competitors deep.  Where are women Moth sailors today?  Mariann Wark swept both of the races sailed.  Sadly, other than the photo at the top of this post, I  have no photo of the Women's Champion sailing her Titan Moth, Nr 1585, Lil Warrior II.

So, that's a wrap on the '59 Nats.  The Moth Class was at a peak in the late 1950s and early 1960s.  Later the Sunfish and then the Laser would undercut the Moth Boat but in the era reported here, the Moth was perhaps the biggest game in town--at least along the eastern seaboard of the U.S.A.
Posted by George A at 3:08 PM 16 comments: 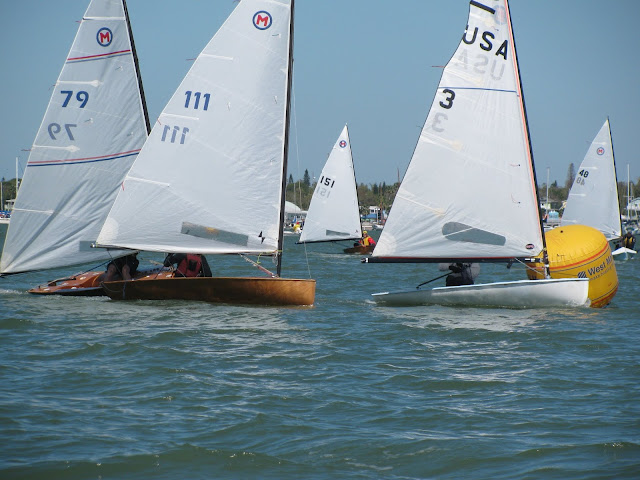 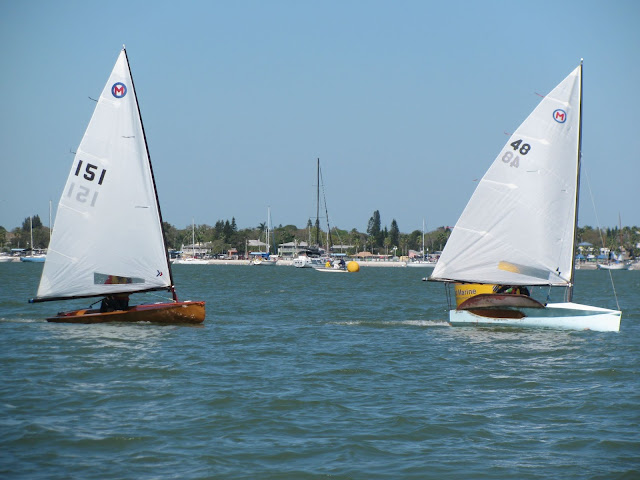 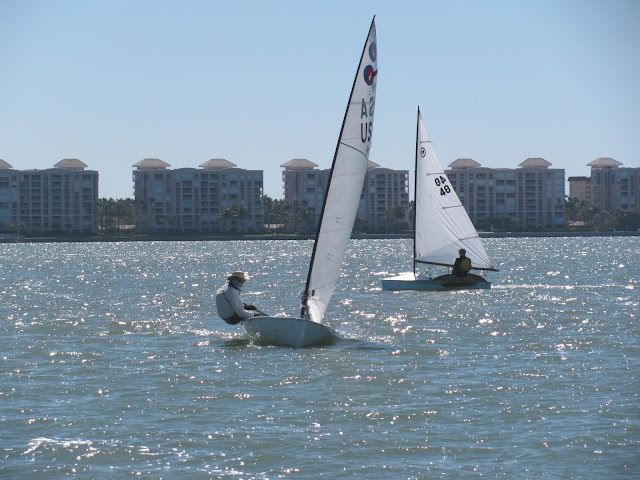 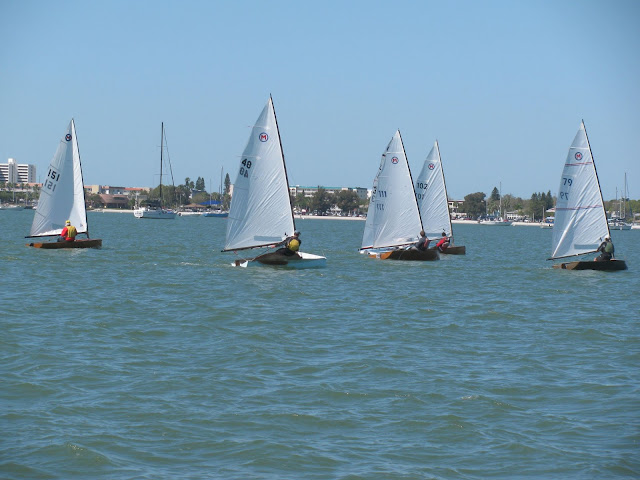 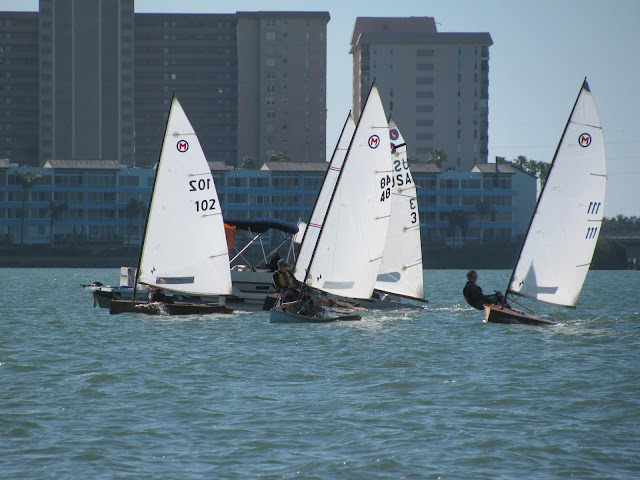 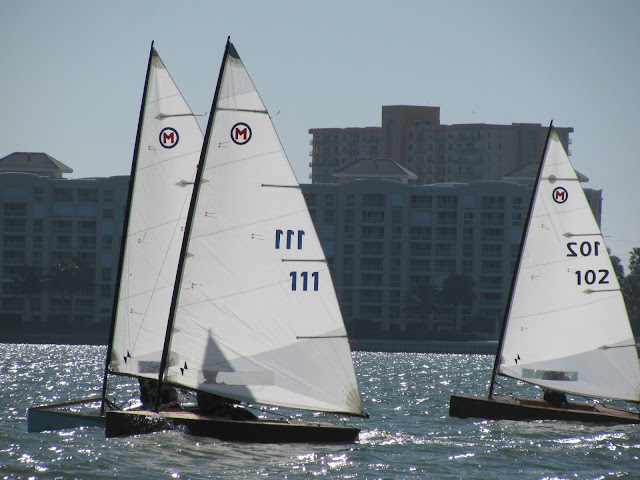 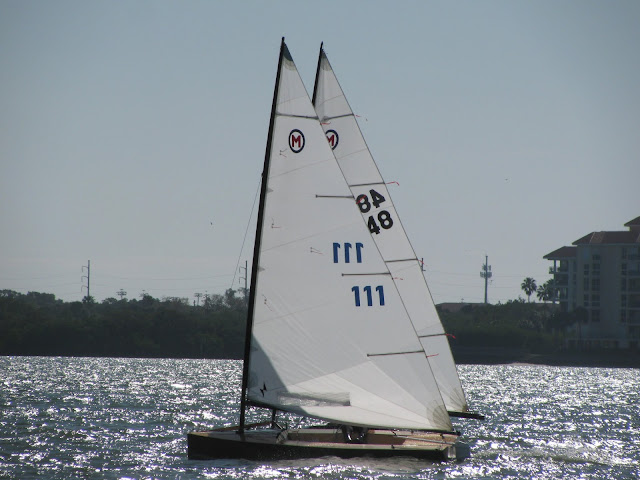 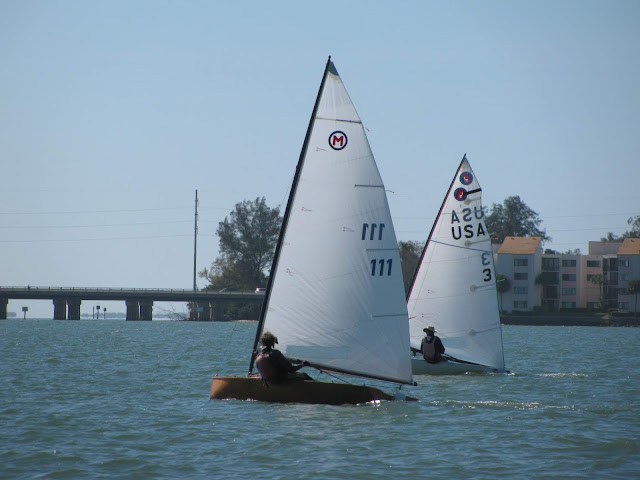 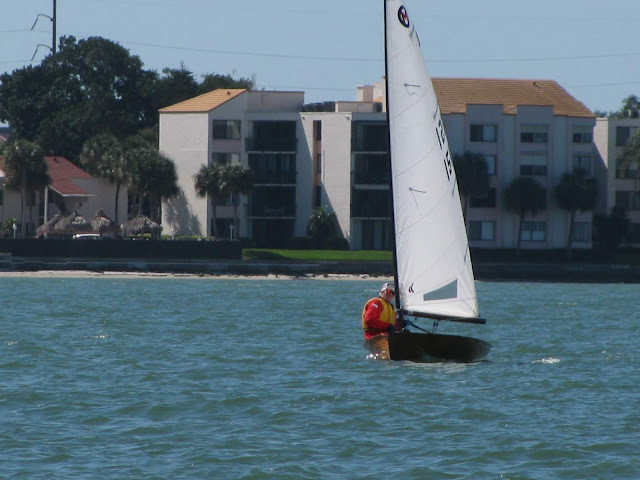