Tomorrow at O-dark-thirty hours diarist-woman and I will hit the road for sunny FLA.  Our son Erik is back in school and so will have to sit this regatta out and crack the books instead.  We'll stop for the night in Ocala with Moth Boating friends and then drive the final two hours to Gulfport on Friday morning.  I'm posting a few teaser pix from previous years just to get in the mood.


Cape May is the southern most tip of the state of New Jersey.  This particular piece of property was "discovered" by a Dutch captain named Coenelius Mey in 1611.  Cape May is located at a point where the Atlantic Ocean meets Delaware Bay and is an interesting place to visit because of the many well preserved homes as well as the beach.  Additionally, Cape May is well known as a good birder's spot along the Atlantic fly-way for watching migratory birds.  We usually visit Cape May several time a year.  It's roughly an hour's drive south of Brigantine.


We parked our car in the municipal parking lot behind the liquor store, fed the meter and headed straight for Washington St. 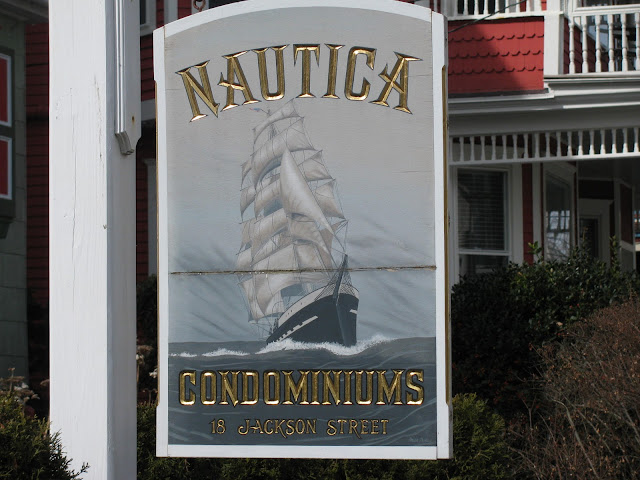 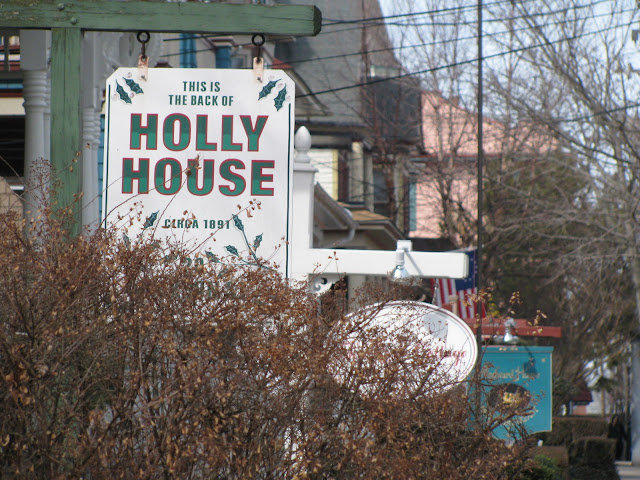 I've just touched on the surface of the interesting buildings in the old part of Cape May.  We'll visit again went the weather warms. But now I must start packing for Gulfport.
Posted by George A at 7:54 PM 3 comments:

Email ThisBlogThis!Share to TwitterShare to FacebookShare to Pinterest
Labels: Cape May NJ

Winter Gale: Down on the Jersey Shore.

This past weekend was one of the so called "three day weekends" observed by the U.S. government and generally, but not universally, followed by most schools and other employers as well.  These long weekends are much loved by folks like your diarist who look forward to a small break from work.  Actually this coming week will be unusual in that I'll only go to the lab two out of five work days.  This coming Thursday and Friday I'll be traveling down I-95 to Gulfport, Florida for the Moth Boat Mid-Winter Regatta.  But back to this past weekend; we went to check our cottage on the island of Brigantine.  Saturday was quite windy as a winter gale blew through along the coast.  The Atlantic City airport recorded wind gusts up to 52 mph and other near-by locations had gusts higher than that.  This gale was not the usual Nor'easter but one associated with a front moving across the island from the west.  West winds tend to accentuate full moon low tides (i.e. a "blow out" low tide).  Such tides sometimes uncover interesting bits of sea glass, shells and other odds and ends.  Your diarist found no sea glass but did manage to snap a few pix.


Sunday we will wander down the coast to Cape May.  Stay tuned.
Posted by George A at 4:38 PM 2 comments:

Your diarist has been distracted with preparations for the up-coming Classic Moth Boat Mid-Winter Regatta, to be held down in Gulfport, Florida the last weekend of Feb.  I'm still trying to decide between two boats.  But more about that in a future post.

Currently Bowie, Maryland is enjoying a rare couple of days of 70 degree weather in the middle of what is generally the coldest month of the year.  I don't plan on launching into a discussion about global warming or whether or not human activity is contributing to that other than to say as long as I don't have to shovel anything I'm not going to complain.  The warm temps have gotten me thinking about my bicycles resting in the garage since last November (yes, I'll admit it: I'm a cold wimp).

While I'm rummaging around in the garage looking for boat parts I may as well introduce you to one of my bikes: A Raleigh Team Pro Replica from the early 1980s.  I picked this little bike up after seeing her malinger through several bid cycles on a certain popular on-line auction site without attracting a single bid.  The seller relisted the bike for one final time stating that if nobody bid this time he'd break her for parts. The bike although missing her head badge was unmistakably a Raleigh Team Professional Replica, i.e. built to the design of Gerald O'Donovan but constructed at Raleigh's main Worksop factory rather than the SBDU or Special Bicycle Development Unit in Derbyshire.  I also have a pukka SBDU Team Pro frame but I'll talk about that one in a later post.

The bike in question retained a mish-mash of  period correct Campagnolo Nuovo Record components, but mostly with Campag patent dates which were slightly out of sync with the age of the frame. However, the most curious aspect of this machine was that the frame had been repainted an attractive but admittedly unauthentic shade of blue and sported an unusual name painted on both sides of the down tube:"Raimo Ahti".  I think the combination of odd component dates, and that paint job contributed to the reason why this particular bike failed to attract the lust and bidding frenzy from the usual bike snob crowd that lurks in the dark corners of "Flea-bay".I placed the minimum opening bid and waited to be snipped at the last second.  Much to my amazement that didn't happen and I won the auction.

After receiving the bike I did a little web search to see if I could discover anything about this mysterious Raimo Ahti.  Obviously the name was Finnish.  What I discovered is that my bike was the one time property of a 70+ year old stone mason who lived in Lunenberg, Massachusetts.  It turned out that Raimo's first love is cross-country ski racing and he used to run in the summer months to keep fit.  As he aged he switched from running to bike racing because cycling left him fresher. In a quote from the Worcester, Mass Telegram and Gazette (http://www.ltolman.org/93arch/60996.htm) Raimo said of his training rides "You can go three to five hours, and when you come back you can wash the floors and cut the grass. If you run three hours, you can't go dancing afterward. My wife and I love to dance."  (Ah, the allure of Nordic dancing--diarist-woman also loves it but your diarist is clumsy and can't get the steps down to all those dances...).  In his mid-60s Raimo was still winning citizen races in his age group.

Raimo, now in his 70s, still skis.  I was able to track him down via contact with a Finnish-American cultural society up in Massachusetts and we exchanged some enjoyable letters.  Someday I  hope to get up to his neck of the woods and shake his hand in person.  It's not every day you meet a multi-discipline champion via flea-bay!  This man very definitely has "sisu".   As for the mish-mash of component dates on the bike it boils down to this: Raimo was a racer, stuff broke during events and he replaced them with whatever a local bike shop had on hand without worrying about what a bunch of collectors might think years later.  To me those mismatched patent dates are a silent testament to the bike's racing history and make her all the more special. I also like the Finnish blue paint  job and will always keep Raimo's name on the down tube.  I told him that I do plan to change one little thing:  I'm going to paint the lug cut-outs on the frame bright yellow since my bride is a Svenska fickor!

A day on the Delmarva

"Delmarva" is a contraction of Delaware-Maryland-Virginia.  If you look at a map of the Mid-Atlantic region you will see that the eastern shore of the Chesapeake bay is defined by a peninsula which is split between three states: Delaware, Maryland and Virginia.  Today after crossing the bay bridge I passed through two out of three of those states on my way to Bill Boyle's house.  Such is life if one lives in the smaller states of or Union.

Off to "slower" Delaware

Make that lower Delaware, as in south of the Chesapeake & Delaware canal.  The natives call their portion of the state "slower" Delaware in reference to the agricultural nature of the bottom 2/3 of the state compared to the northern 1/3 which is highly developed, hectic in pace and centered around the chemical industry.

My purpose in this trip is to help one of my boat building buddies, Bill Boyle, work on a boat he's building under contract for a young New England designer.  Since this hull is the prototype, the project is hush-hush so expect no photos of the boat under construction.  When I get home perhaps there will be a few snaps of the Delware tundra for your inspection.  In the meantime I'll leave you with a nugget from William Shakespeare which for me sums up this somewhat depressing middle part of winter.

That time of year thou mayst in me behold
When yellow leaves, or none, or few, do hang
Upon those boughs which shake against the cold,
Bare ruined choirs, where late
the sweet birds sang.

— Wm. Shakespeare
Posted by George A at 6:02 AM No comments:

Email ThisBlogThis!Share to TwitterShare to FacebookShare to Pinterest
Labels: Delaware

The Greenbrier, Part II along with ruminations about Groundhog Day/Candlemas

Ha, I'm back.  I'm settling down in front of my poor ol' flatscreen iMac with a glass of Cycles Gladiator Merlot.  Today is the 2nd of February, better known as Groundhog Day and also Candlemas (not to be confused with Candlemass which is a Swedish heavy metal band).  Today, out at Gobbler's Knob, Pennsylvania,  Punxsutawney Phil--Mother Nature's mid-winter prognosticating spokes-varmit, failed to see his shadow.  Cynics in the audience will no doubt trot out the old chestnut about how this means we only have a month and a half of bad weather as opposed to six more weeks of winter if Phil had seen his shadow.  Say what you will.  I'm an optimist.  I see signs of the coming spring every time I go for a walk; birds are flirting, squirrels are running around, snow is melting and it's less than a month before I go down to Gulfport, Florida for the Classic Moth Boat Association's Mid-Winter Regatta.

More about Gulfport in coming posts, but for now it's time to return to our Greenbrier adventure.  When we last left our hero and heroine they were boarding a west-bound train at Union Station.  One of the things I like about train travel is that one gets to sneak a peak into the back yards of people living adjacent to the tracks.  Sadly the train windows were filthy, precluding decent photography, so you'll just have to imagine the many wondrous sights I witnessed as the Cardinal glided along.  I use the word "glided" in the loosest sense.  The rail bed between Charlottesville and White Sulphur Springs is rather lumpy.


Alice kept us quite busy touring nearby Lewisburg and so I didn't get to sample the bunker tour.  Perhaps next time.  I did however get out on a couple of occasions to walk around the grounds.  I wanted to see the original Sulphur Spring.