The Gypster gets a nose job.

Hurricane Sandy has pretty much sidelined the last bit of racing for this season so we may as well get on with boat building/rebuilding  projects with an eye towards the Mid-Winter Regatta next February.  With that in mind I approached Classic Moth builder extraordinaire Joe Bousquet to see if he was interested in modifying my wooden Europe design Moth Gypsy.  A previous owner had asked Joe to modify the boat's foredeck about 10 years ago to increase the room under the boom.  The old rule for Classic Moth Boats stated that the boom could be no higher than 12 inches above deck height.  This was alright for juniors and smaller adults but problematic for larger, older sailors.  A common way to beat the rule was to increase the crown of the foredeck by an exaggerated amount and thus raise the boom.  Joe did so and the result can be seen in the third photo down in this earlier post.  While this humpy foredeck does get the boom off the skipper's back and in fact did meet the letter rather than the spirit of the rule, it is an inelegant solution to live with in terms of both storage in the boat house and while trailering or car topping the boat to regattas.  Thankfully the class voted to change the rule regulating boom height above the deck and so humpy foredecks are no longer an advantage.  Plus, opinions are divided as to the esthetics of such foredecks.  I personally don't care for them.  With the boat in my ownership, it was time for that hump to go.  Yes, I could have hacked it off myself but I'll be the first to admit that my level of craftsmanship is inferior to Joe's and Gypsy is too pretty a boat for a hack job.  I also have a bad habit of starting projects and then taking forever to finish them.  It turned out that I had a carbon fiber boom that Joe was interested in and he had a break from repairing the rowing shells for the crew team at Catholic High School where he teaches math--a deal was agreed to and so last Saturday Gypsy and I made the four hour trip from diarist HQ to Norfolk, Virginia.

Your diarist's house is located on the beach-block end of a street at about the mid-point of the island of Brigantine.  While it's almost ridiculous to talk about "elevation" on a mostly flat barrier island, the middle of the island is both the wide point and the high point of Brigantine Beach.  An extra 25 feet of elevation and and extra several hundred yards of beach before the dunes was basically the difference between getting flooded and staying dry.  We were extremely lucky and sustained no damage other than having a section of fence knocked down and a downspout from one of the gutters blown off.  I was able to repair both items the same day.  Others on the island, particularly on the north end and the bay side were not as lucky.  We took a ride to check on friends living on the bay side and passed street after street of people who were piling wet carpets, sofas, bedding, large appliances, sheet rock and all manner of household items on the curb for bulk trash pick up.  We limited taking photos of all that because it seemed callous to snap pictures of other people's misery.  What follows are some pix from the beach, the promenade, the yacht club and a limited number of other island locations. As of last week some streets were still blocked off by the police department. 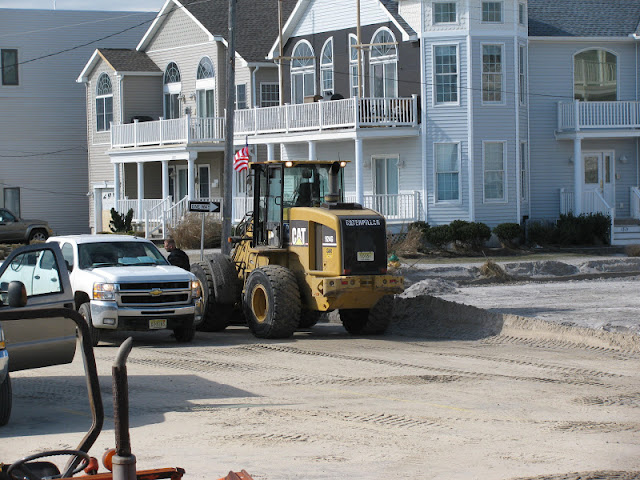 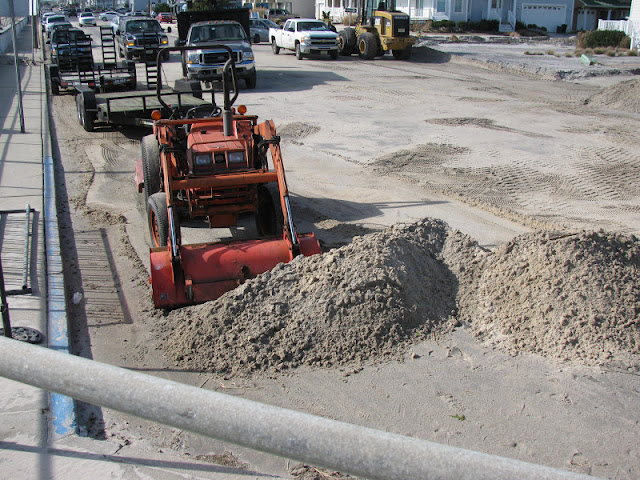 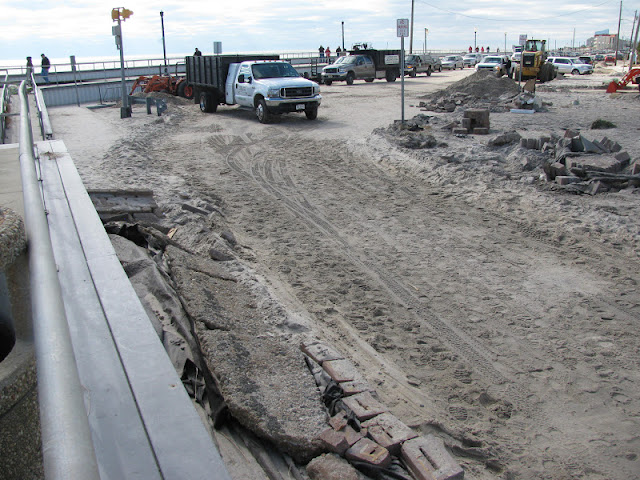 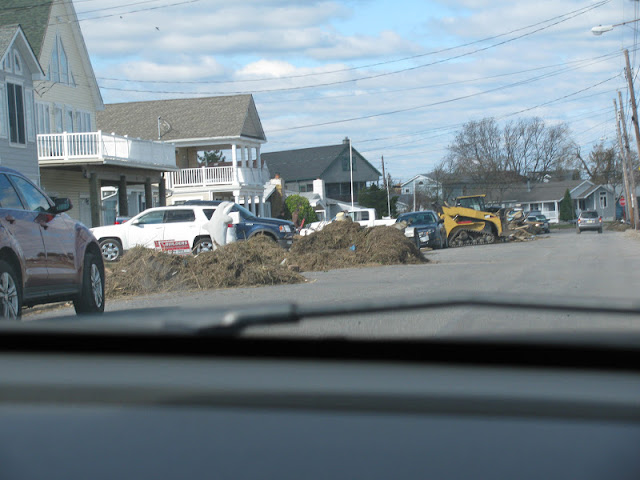 We stopped to check on friends who live by the bay on West Shore Drive.  The house was OK but the garage had been flooded.  After cresting the bulkhead the water was mailbox high.  They are in the middle of restoring an old GP-14 sailing dinghy.  The dinghy must be a lucky boat because she'd floated from where she was stored, under an overhead deck on the bay side of the house, to the front of the house where the receding waters deposited her on the driveway.  She could have just as easily been swept over the bulkhead to who knows where.

The Governor's Evacuation Order has finally been rescinded and property owners can now return to the barrier islands (assuming that the roads are passable) to inspect damage and start the process of clean up.  Diaristwoman and I will go to Brigantine tomorrow.  The islands still don't have electricity so I'm bringing battery operated tools.  I'm hopeful that our house, which is located on a high point of the island, is still standing.  I've seen photos on the internet showing flooding in Brigantine where one can see just the tops of automobiles sticking above the flood waters (note to self: don't buy any used cars from New Jersey for a few years!).  All of those photos are from areas of the island that have a history of flooding during bad storms.

My benchmark storm, by which I measure all others (so far) is the Ash Wednesday Nor'easter of 1962.  That late winter storm put the whole island briefly under water and pushed the sand dunes across the island from the ocean side to the bay, and what sand wasn't left clogging roads and lawns was dumped into the bay.  It took a year and a half for dredges to pump the sand from the bay back to the ocean front of the island and many many years to build the dunes back up.  Many homes in Brigantine and up and down the Jersey shore were total loses due to that storm.  Our house was lucky.  We had 3 inches of muck in the lower level of the house and my father quickly put me in charge of a mop and ringer bucket to take care of that.  Later on, he hired a man with a road grader to scrape the foot of beach sand off the lawn and throw down some grass seed and that was it for our storm recovery efforts. The only other thing out of the ordinary with that 1962 storm was that we had a large propane tank from Lakehurst, New Jersey, which is about 75 miles north of Brigantine, deposited in our front yard.  The gas company eventually came and retrieved it.  I  hope our little house's run of luck has remained strong!  We shall see.  One thing in our favor is that the dunes are (probably were) much larger than in 1962.  I've heard from another club member that BYC's docks took a hit but it appears that our clubhouse wasn't flooded.  I have seen photos from the Surf City Yacht Club on neighboring Long Beach Island and they aren't pretty.

Finally, a few days ago President Barack Obama and New Jersey Governor Chris Christie inspected the damage on Brigantine.  It's never a good thing when major politicians come to "inspect" your town after a big storm.  The only thing we're missing is a crew from the Weather Channel!