OK, for the two readers who are not related to me and wonder how things turned out on the barrier island of Brigantine I can happily report that although Irene passed quite close to the island as a Cat. 1 hurricane (estimated to be about 10 miles off the coast, with sustained winds above 74 mph) we had very light damage at the "Hotel George"--just a few shingles off the roof.  Both the states of Delaware and New Jersey imposed travel bans while the storm was in play but we were able to go check our house on Monday.  Getting there was frustrating due to many detours around downed power lines and deep, standing water in places close to lakes or swamps in Maryland, Delaware and New Jersey.

Enjoy the Weavers.  It might put you in the proper mood to plough through the rest of this post!  Diaristwoman and I spent the day driving up to Brigantine to secure the house before the arrival of Hurricane Irene.  Of course today was a beautiful day with gentle wind--perfect for goofing off with a good book and a beach chair.  Regrettably we spent the day preparing for the storm.  We left Maryland early in order to get on the island before the 2 pm deadline, after which the police were closing the only bridge leading to the island to oncoming traffic.  On the ride east to the coast we encountered a solid stream of traffic heading west.  It was good to see that tourists were heeding the evacuation orders but one had an unsettling feeling going against the flow!  Did we miss reading the daily memo?  Was there something we didn't know? 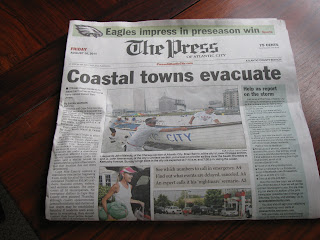 Both Bill and I cut our Moth Boat racing teeth with leaky old Ventnor Moths.  We both graduated to new boats after our respective skills improved.  And again, we both moved up to Cates Florida-design boats.  I bought mine from George Szabo, a Cooper River Yacht Club racer who built a couple boats each winter, one for himself and the other for speculation.  I bought Nr 2249 from George S. in 1962.  Bill, on the other hand, teamed up with the Patterson family, down at Sea Isle City, and built his own boat.  That boat is the subject of today's post.

I'm a stubborn soul and  I've been trying without any luck to identify the name of the movie, the names of the actors and actress and to discover if the movie survives intact or if this youtube clip is all that remains.  None of my Swedish in-laws remember this film.  Nor does anyone I've contacted in various MG clubs both here in the States and in Scandinavia.  The movie dates to no earlier than the car.  The car is an MG J1.  The MG Car Company didn't introduce the J-series model range until 1932 so that gives us the earliest year this movie could have been made.  The J-series included the J1, a four seater as seen here, the archetypal J2; a two seat sports which set the basic formula for small sports cars up through the mid-1950s, and the J3 and J4 which were also two seaters.  The J3 was used for sporting trials and rallies where as the J4 was a full on road racer.  The J3 and 4 had destroked 750cc engines to comply with class regulations for their respective events and both of those types were also supercharged.  The J1 and J2 were produced with normal road use in mind and had non-supercharged 850cc engines.  Any help answering my questions regarding the film clip will be appreciated!  In the meantime enjoy this little trip in the "way-back" machine.

Back in the late '50s and early '60s I was racing an old Ventnor Moth and mostly stayed within the comfort zone of my own club's home waters.  One of the kids I raced against was Kenn Claus.  Kenn's half-brother Fred sent me some photos taken between the years 1959 and 1960.  Enjoy!