Once again Flea-bay has produced a piece of Moth Boat history.  This time in the form of an old newspaper photograph dated the 17th of October, 1938.  I was particularly drawn to this photo because William Duffield and I have been slowly restoring the 1938 National Champion, Imp Too, Nr 449.

Imp Too was designed, built and raced by Edwin Channing, a naval aviator.  At the beginning of hostilities, Channing asked Dorr Willey to store his boat for the duration.  Channing did not survive the war and Dorr had this boat in storage along with one of his own Moths until a local Elizabeth City man, Gordon Fearing, asked if he could buy them.  Dorr agreed.  One of the interesting features of Imp Too is that she has "soft" or rounded chines.  This feature is very difficult to build but Dorr, obviously influenced by Channing's boat, built four or perhaps five examples of his own design, incorporating this feature rather than the normal "hard" chines which are featured on not only on his stock design but many other Moths as well.  The other Moth which Dorr held onto after the passage of time was one of his own soft chined Moths, Miss Inez, Nr 808.


One might ask what I mean when I speak of hard vs soft chines.  A few pictures might clear that up.  First, here are a couple of pix of my "stock" Dorr Willey- build Moth which has hard chines:


Compare that with these photos of Imp Too, currently under restoration:

So, getting back to the picture which started this post, while I may have a rare photo of the 1938 U.S. National champion on the water, the resolution is too poor to learn anything new about the boat or her skipper.  I will keep trolling Flea-bay in the hopes that a better photograph will eventually surface.
Posted by George A at 3:56 PM 7 comments:

An old Moth in Lewes, Delaware

Several years ago Bill Boyle drove over to Lewes, Delaware to look at an old Moth Boat which had been donated to the local Historical Society.  I've been trying to see this boat for the past two years without any luck (the Museum was closed on one occasion, the "right" person was out of town on another).  We happened to be in Lewes for a few days before New Year's Eve, and the way the calendar fell, we were in town on a day which the Historical Society's buildings were supposedly open.  So with great anticipation I went to the Society's main building.  That building was locked but a nearby workshop was open.  I asked a man who was working on an oyster boat if he knew anything about an old Moth Boat.  He listened to my story and we looked all through the shop (including the overhead loft) without success.  Little did we know how close we were to the actual boat--more on that later.

After a bit of head scratching I was told to go to another building about a mile away where that the little boat in question was sure to be found.  Trouble was, that building was not open until the next day.  The next day I drove over with great anticipation.  I went inside and asked the volunteer on duty if I could see the Moth Boat.  He said "the what boat?" and then directed me to various small boats on display.  One was a dug out canoe, another turned out to be a fiberglass Sunfish, but no Moth.  He started to give me the impression that I was either crazy or misinformed or both (I get that a lot).  I indicated that I indeed was of sound mind and asked him if I could see his iPad for a  moment.  He did so just to humor me and I  quickly showed him the Historical Society's page concerning the Moth:


With the existence of some sort of Moth Boat now established, my stock went up a couple of points and the volunteer started to call various Historical Society members.  I was told to return to the shop building where I'd meet one of the society directors.  And so I did.  The director took me on a hike through several other storage buildings.  We admired several interesting and no doubt historical boats, but no Moth Boat.  I could tell that the director was getting a little embarrassed that he had no clue as to the whereabouts of this boat which had been, ten years earlier, donated to the Society, but he told me that I had piqued his curiosity and that he would find the boat in question and give me a call.  We left things at that.  New Year's eve came and went. 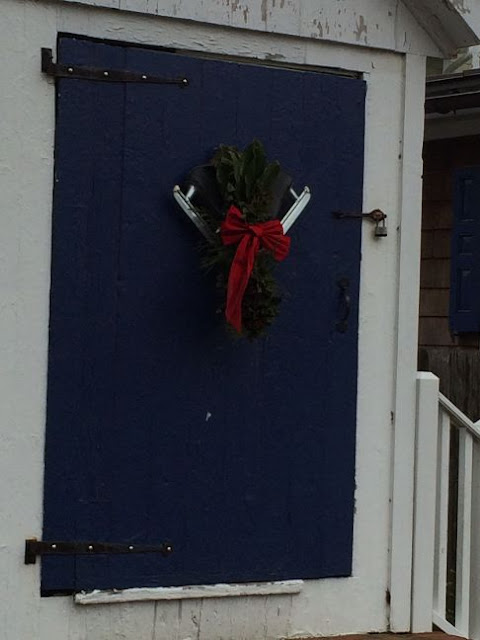 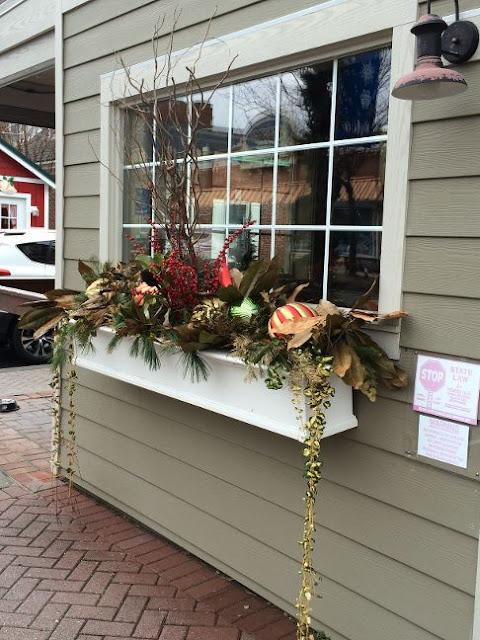 I did make it.  The boat was "hiding in plain sight" behind a bunch of lumber and tools, tipped up on one side, leaning against a wall.  A day earlier we had walked right by it! 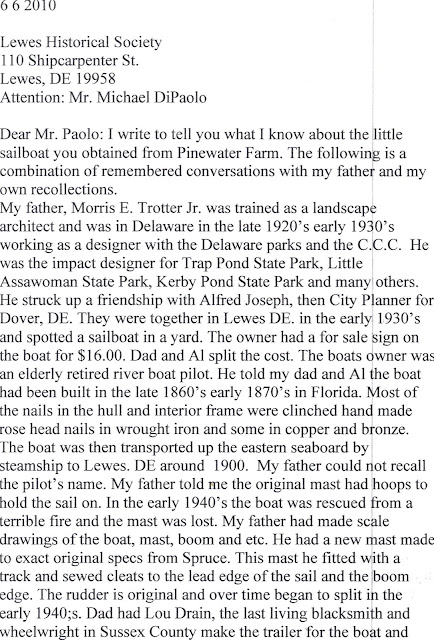 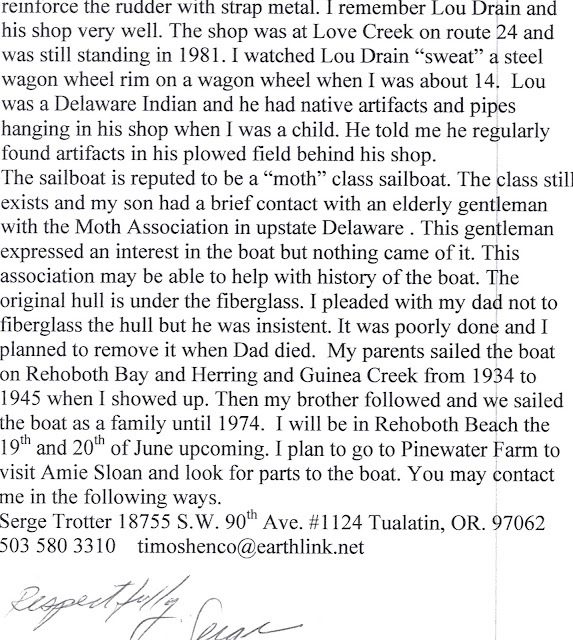 After viewing the boat, I told the director one way to raise money, if the society wanted to fully restore the boat would be to start a crowd funding site on the internet.  He liked the idea, and I said if that happens I'd help spread the word.

This little story of a local Historical Society and a Moth Boat brings several points to mind:

- Most museums and historical societies are artifact rich but cash poor.  Ideally, they want donations which can immediately be placed on display with no or minimal work/expense involved. Basically it's easier to donate than it is to receive, house, and maintain something.  Indeed many donations occur because the donor can no longer store or provide upkeep for the item in question.

- A donation requiring that money, skill and energy be invested before being displayable must be very significant to the locale which the museum or society is attempting to promote.

- Donations requiring inputs of time, skill and money tend to be "stored", and if not compelling to the museum's mission, can sometimes be "lost" in storage until someone (like your old diarist) makes a concerted effort to see them.

Bottom line: if  you plan to donate a boat, she should (a) go to an appropriate museum, (b) be restored before being donated and (c) if possible, an endowment of funds earmarked for the boat's upkeep should be part of the donation.

I will follow up on this particular Moth in the hopes that she eventually does go on display and that more info about the correct build date, who the builder was and so on can be explored.
Posted by George A at 1:41 PM 4 comments:


Eagle eyed CMBA member, Chandler Owen spotted this old postcard on flea-bay.  As can be seen, the card greets us from Painesville, Ohio.  However, of the boats which I can identify by sail number, I'm led to believe that the venue isn't from the "buckeye state", but instead somewhere in the Charleston, South Carolina area.  Perhaps Mount Pleasant?

The boat on port tack, closest to the camera, is Randall Swan's Connecticut design Blue Moon II, Nr 1149.  I don't know if Randall is at the tiller or not but the ID of the boat is not in question.  Interestingly, this boat and several others are being sailed two up which tells us that the young skippers were too light to keep their boats flat with the available wind at their disposal.  Now that we're adults this is no longer a requirement!

Randall's father bought this particular boat from a display at the 1949 New York Boat Show, directly from her designer/builder, Skip Etchells.  At the time, Etchells operated a business called "Old Greenwich Boat Works", located in Old Greenwich, Connecticut.  Perhaps the most significant aspect of the Connecticut was the rig.  Etchells is probably better know as a Star boat builder and competitor.  As such he was largely responsible for introducing the Moth Class to "bendy" masts.  Randall once told me that the young sailors with Connecticut Moths didn't quite know what they were doing when they sheeted in hard and bent the mast, but they knew that the boats were more controllable and thus faster in a big breeze.

The boat with sail number 1202 is, I believe, Rob Johnson in Gremlin.  I'm fairly sure that this boat and Nr 1103 are Darby-built Ventnor Moths.  The old records in my possession indicate that Nr 1203 was owned by Gordon Darby.  Gordon may well be in this picture.  As is the case with many pictures, the more distant boats defy identification and so their designs and skippers remain a mystery.  A mystery which perhaps some reader can partially elucidate with a comment.

In closing, here we have another interesting old postcard featuring Moth Boats on sunny, sparkling waters to ponder over a chilly winter night--even if I remain unconvinced of the venue.  It's a pity that modern postcards so seldomly feature scenes with boats or yacht clubs or races any more.  That makes ones like this one, which I think dates to about 1952, all the more interesting to find.

Added after posting:  I just rec'd this input from Randall Swan:

You are right about the location of the race being Mt Pleasant.Photo shows Castle Pinckney to the West and the only regatta in that location would have been the Mt. pleasant regatta. I believe the dote is 1951, as that was the last year I needed a crew for ballast in most conditions.
Thanks for the photo. Those were the days!
Thanks Randall!  I was off a year!
Posted by George A at 6:15 PM No comments: